Grant County commissioners heard and asked questions about a virtual presentation at the beginning of their work session on Nov. 17, 2020.

Representatives from the University of New Mexico School of Architecture and Planning gave the presentation, presented virtually through County Community Development and Planning Department Director Michael “Mischa” Larisch’s computer and projected on the screens in the Commissioners Meeting Room.

Castillo said the three of them toured the memorial site this summer. “We looked at precedents across the globe. We are looking at it for the tourism benefit and as an iconic memorial.”

He showed photos of a memorial in Mexico City and said it was made of steel. “It would connect to the silver and gold in Grant County. We developed two designs.” 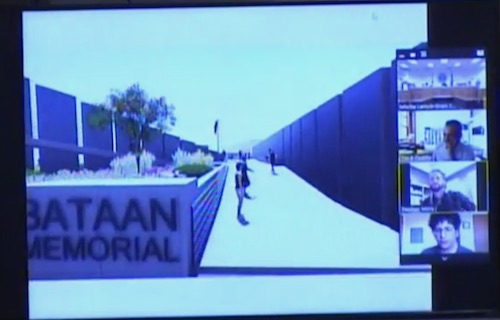 Design 1 for Bataan Memorial park. Pictured on the right are commissioners at the very top and architects from second from top, Tim Castillo, middle, Stephen Mora and bottom, Jaziel Cervantes-Carreon.

Mora said he liked the monolithic design of the Mexico City memorial. “I thought about the experience people coming to the site would have. The layout emphasizes the panels, where images and text can be inscribed. On each steel and copper panel, we would try to find ways to introduce information for visitors.”

Castillo also talked about augmented reality being part of the site. “With a phone or tablet, you could hear a story about the memorial. It would be embedded with a narrative through a voiceover or video.”

Mora noted that the design leads up to a view of the Kneeling Nun. “That’s how we oriented the site.”

Castillo said that the memorial at Angel Fire has an amphitheater and the design is very “elegant.” 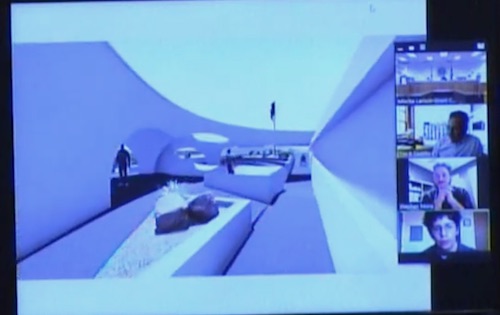 Design No. 2 for Bataan Memorial, with commissioners at top and architects at right from second from top, Castillo, Mora and Cervantes-Carreon.

Cervantes-Carreon talked about the second design as a space to bring people together. The design includes an amphitheater, designed for civic engagements. “It’s also a space to remember veterans. The shape of the pavilion has walls where information can be provided to the visitors. The arc area can have images or text on the walls, and it offers shade for the community. Again, the shape points out toward the Kneeling Nun.”

District 2 Commissioner Javier “Harvey” Salas asked what the panels would be constructed of.

Mora said they would likely be granite.

Salas asked if they could be etched.

Mora replied that if they were metal faced, quite a few different ways could be used to etch them. “With stone there are also different ways to etch it. With the augmented reality, we have had a discussion on how to archive the materials. It’s an issue of capturing, archiving and presenting the information.”

Castillo also mentioned the possibility of backlighting the text for readability at night. “Depending on the cost, the panels could be concrete or stucco and potentially metal on the second design, too.”

District 3 Commissioner Alicia Edwards said: “Those are awesomely exciting designs. It is so exciting to see the possibility of such a memorial in Grant County. I’m interested in how you could possibly mix elements of both. Is copper an appropriate metal to use?”

Castillo said copper would have a higher cost, and Edwards said with a chuckle: “We could ask Freeport to put up the cost.”

District 1 Commissioner and Chairman Chris Ponce said: “You didn’t make it easy. An amphitheater would be great.”

District 5 Commissioner Harry Browne said the designs made it easier for the commissioners to see visitors coming in. “You did a great job taking advantage of the site to include a view of the Kneeling Nun. The geographic location also includes Fort Bayard and the National Cemetery. With an eye toward the historical context of the fort, both designs are quite modern. Did you consider a more historic design?”

Castillo replied: “We considered Fort Bayard in terms of its architectural style.”

Mora said: “It’s a great point you make, commissioner, but in designing something new, it sometimes compromises the historic. If we were to duplicate Fort Bayard, would it diminish the authenticity of Fort Bayard? We often want to make sure that what’s historic and what’s new are different. I think the different identity is safer.”

Salas noted that the name of the park is Bataan. “That’s very important. We had so many veterans from here in Bataan. The opportunities should focus on Bataan, but these ideas open up all sorts of possibilities.”

County Manager Charlene Webb gave the background on the project. “I was approached by local veterans who are very passionate about revamping the park, which needs repair. What we’re looking for is how to move forward. I’m asking you how to move forward. Maybe we need an outreach to the community. This group is very serious that the park must honor those who deserve the recognition.”

Edwards asked what the group was thinking. Larisch replied that the spokesman said they are already thinking about what to put on the panels.

Edwards asked if there was any concept of how much it would cost.

“I’m hearing you have a desire to move forward,” Webb said. “The next step would be to determine the cost and if we can ever find enough money to do it. Priscilla (Lucero, Southwest New Mexico Council of Governments executive director) would be a good resource for us.”

Edwards said she was “enthusiastic” about moving forward.

Browne cautioned not forgetting the connection to the Continental Divide Trail, and “our trails. We have lots of ideas of things we want to do. I’m a supporter, but I want to see how much it will cost. It’s costing us already $1.5 million just for the ADA work at the park. I’m thinking $5 million to $10 million for this project. We would need a whole lot more visitors to pay for that with gross receipts taxes. I also see community building benefits for the county and for those serving. I am concerned about enthusiasm tempered by cost. I’m a cautious supporter.”

Salas said he had been to the veterans’ memorial in Angel fire. “It’s beautiful and they do other things there, too. I want to make sure that what we want Bataan to be is doable. I wish we had a crystal ball and how Fort Bayard can be developed, too.”

District 4 Commissioner Billy Billings said his first question, like Browne’s was about being more historically based. “The memorial we built only had a 10-to-15-year life. Maybe we can scale this project back. I like the first design for longevity and practicality.”

Webb said the next step needs to be what fits in with all the other county initiatives and whether the county can come up with the funding.

Ponce said he is still enthusiastic. “I’m passionate about Bataan Park. It can be the gateway to trails to Fort Bayard and to outdoor recreation, plus tournaments and sports. We’re already doing the ADA for the park. I see it as a big plus for the Mining District and for veterans. It can also help Santa Clara with Fort Bayard and visitors.”

Edwards said she really appreciates the conversations the commissioners have. “We can be enthusiastic but realize it’s a 20-to-30-year plan. Having led a project that went from vision to fruition, I know it has to be a comprehensive vision, long-term. I’m a big fan of dreaming big and figuring out how to finish such a project.”

Salas said it surprises him how many people go to the park, to Fort Bayard and to the cemetery “even with nothing dedicated to visitors. If we had trails and signs with historical data, think how many more people would be out there.”

Billings said he is enthusiastic, but also realistic. “I think we can create something. I would like to see the picture that is on the plaster wall out there now be archived and recreated with everyone in the photo in it. Some were left out.”

The next article will begin with county reports.