[Editor's Note: Due to the length of this work session and regular meeting, they will be broken up into several articles. This one will cover the county directors' and elected officials' reports.] 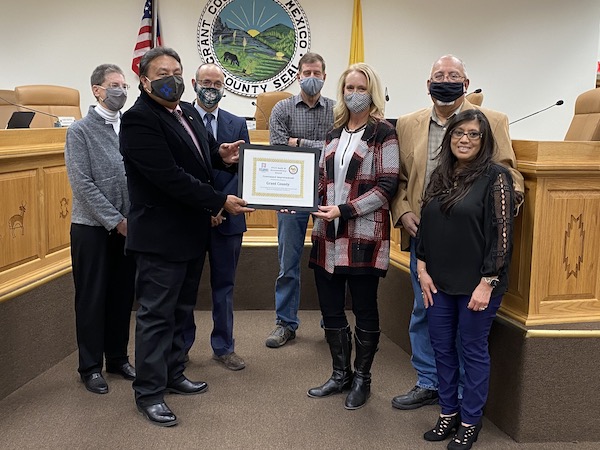 From left are Commissioners Alicia Edwards, Chris Ponce, Harry Browne, Billy Billings, County Manager Charlene Webb, Commissioner Javier Salas and Financial Officer Linda Vasquez, who was brought out of her office to be in the photo for the audit and accountability award. (Photo Courtesy of Taysha Walter, executive assistant.)At the beginning of the regular meeting on Jan. 14, 2021, District 1 Commissioner and Commission Chairman Chris Ponce said he wanted to present a Fiscal Year 2019 Audit and Accountability Award that Grant County received from New Mexico Counties for continued improvement in audits and continued financial excellence. The commissioners presented it to County Manager Charlene Webb and County Financial Officer Linda Vasquez.

On Tuesday, Jan. 12, 2021, at the work session, county reports began with General Services Director Randy Villa, who said he didn't have much to report. "It's business as usual. Maintenance is doing sanitizing. At the shooting range, we got the safety building up. At the airport, the ramp project is going on. The Hachita Fire Station building is up. Corre Caminos is still running. I encourage people to get vaccinated. We have smart people in the right places. I think people see the quicker we can get the vaccinations done, the sooner we'll get back to work."

District 5 Commissioner Harry Browne asked when the shooting range would be back open.

Villa said: "It's still tight quarters. We'll wait for the state to let us know, but I think everyone will be pleased with the changes."

Webb noted that the last health order from the governor "required us to close it again."

The next report came from Community Development and Planning Director Michael "Mischa" Larsich. "We are closing out the airport terminal project and the North Hurley Road project. It's just finalizing the billing and the punch list. For Truck ByPass Road Geotech boring is scheduled. That's a colonias project for design. Little Walnut Road is also a colonias project for design and review. Both engineering firms have hired SWA to do the environment review on those. Bandoni is in the final stages of the construction and easement, so we can start the discussion with the landowners. We've got, I think it's five landowners, who were impacted by the flooding, so we have to get permission from them to do construction on their properties. For Bataan, I'm optimistic we will get the required agreement on the environmental review so that we can get the release of funds. The Santa Rita Volunteer Fire Department has its tanks installed and operational, with the punch list items to finish."

District 3 Commissioner Alicia Edwards said maybe she and Larisch could go out to Bandoni and look at the situation.

Road Superintendent Earl Moore said it was business as usual in his department. "We are working on resident complaints. We patched in Mimbres last week and we will patch in town this week. We did finish Cottage San Road as far as the shoulder. I'm waiting on the stripers to come in and get the stripe done. On the Anderson Road low-water crossing, they are so busy with concrete down on the I-10 bridge that I can't get concrete until Jan. 27. We plan on pouring 170 yards that day and then we'll have to do some more, but we're at the mercy of the schedule. Most of our blade operators will save their time until the end of the year, so they can take 2 ½ weeks off. I'm not going to say we're behind because of that, but because of the dry weather, we can't do much. All the complaints we're getting, we're trying to hit. We'll get them back in circulation. We're hitting the main drag right now."

At the regular meeting, new Treasurer Patrick Cohn said it was an honor to stand before the commissioners. He introduced his Deputy Treasurer Lorraine Castillo. Cohn also praised his staff and thanked the county manager for her assistance. "I have had phenomenal support. I also want to thank county residents for their cooperation while our doors are closed. We do book appointments. I have had conversations with treasurers around the state, as well as the Treasurers' Affiliate looking at investment policy. I have a target date of March to present a modified investment policy. So far this year, we have collected 61.87 percent of property taxes for $3,930,926.63. I am so excited to be in office. I am open to any recommendations. I will try to get analyses on where we can save money in the office and in the county. Stop in at any time."

Ponce welcomed Cohn. "We wish you success. Reach out to us with any questions or concerns."

District 4 Commissioner Billy Billings also welcomed Cohn and said: "I like your comment about saving your office and the county money."

Sheriff Frank Gomez gave the next county report. He summarized some of the number of challenges in his department during 2020. "We had limited access to trainings and issues around the COVID pandemic, but thankfully we had no significant safety or disturbance issues with the election here. We did reach near full staffing and participating in numerous community-based programs, such as D.A.R.E., National Drug Take Back Day, Veteran's Day and Memorial Day services, the Stepping UP Program, the Youth Substance Abuse Prevention Coalition and the COVID Task Force Committee. In 2020, we continued with our efforts to be more transparent and cognizant of resident and community needs. We have made progress toward a Crisis Intervention Program and training, as well as sample program policy reviews. We hope to provide a draft and policy plan this spring or summer. We are working with the Animal Control Officer on services. Stonegarden continues. Most staffers spend at least one day a week in the office. We have seen a significant increase in property crime. We have no slow days or hours anymore. We have answered accident calls and DWIs. We addressed three vehicle fatalities this year. We have also seen a significant increase in unattended deaths. We have followed the significant changes to catch and release, much to the displeasure of the deputies and with public complaints. We continue to commit to serve and protect. It is a challenge for everyone to create a worthwhile quality of life. IT has continued to give us support and the Road Department keeps our vehicles on the road. In December we answered 1,376 Dispatch calls and had 913 self-initiated. For the year, we had 5,835 Dispatch calls and 11,500 self-initiated for a total of 17,388. Of those we had 215 domestic violence, 353 crashes, 18 DWI, 48 burglaries, 85 larcenies and 332 calls for animal control, after it came into our department."

He said the domestic violence trends from January to December were about the same as last year, with many of the same people.

Browne noted that once Gomez started giving them graphs, "it whets the appetite for more. Knowing the number of calls is good, but I wonder how many result in arrests and convictions?"

Gomez said he could not do them now, because of the old CAD system from 1991. "But once we get the new CAD system, he should be able to graph those."

Browne said he had discussed with the manager about the potential for the county investing in electric vehicles. "I see Ford has a new electric Mustang. I know the town has Mustangs and you have Chargers, but I had an electric vehicle with 90,000 miles on it, for which I have done three oil changes, one software patch and, of course, new tires."

Ponce noted that it was difficult to get conviction numbers, because of the lag time between arrests and trials.

District 2 Commissioner Javier "Harvey" Salas said: "The new catch and release policy is not your fault. Are you seeing a new pattern of re-offending?"

Gomez said it happened a lot where a person is arrested, released before they can finish their reports and then is rearrested and back in jail. "We get calls from victims wanting to know why this is happening."

Salas asked if there were any representatives on the panel looking at the policy.

"Yes, they are law enforcement people on the panel," Gomez said. "We are working on changes with the New Mexico Sheriff's Association. Its chairman sits on the panel."