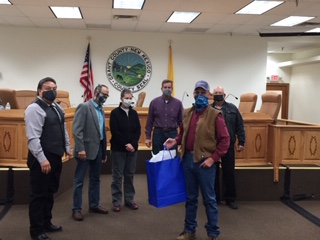 Following the presentation to retiring Road Superintendent Earl Moore, commissioners recognized Moore for his leadership and years of service at the department.

"It is my honor to present to Earl Moore this  gift for his 20 plus years at the department," County Manager Charlene Webb said. "I learned a lot from him. I came from the flat lands, where the blading of roads was different because they were all flat. I will certainly miss him. It will be hard to fill his shoes."

District 5 Commissioner Harry Browne said: "Thank you for every time answering my calls. I always appreciated how fast you replied and took care of issues."

District 3 Commissioner Alicia Edwards noted how patient Moore was to her, as a first-time commissioner. "He always provided an immediate response to our constituents."

District 4 Commissioner Billy Billings said he didn't want to be repetitive, "but Earl always had a quick response. I would send him photos and it would be fixed before you could turn around."

"I'm going to recap the December numbers for you," Brickner said. "For the month of December, gross revenues were $567,000 greater than budget; net patient revenues were $119,000 less than budget and lower than the fiscal year run rate, driven by shifts in the payer mix; operating expenses were $80,000 higher than the budget. Some key statistics were discharges in December exceeded budget by seven, with five additional OB discharges; average length of stay for the month was 3.4 days, driven by acuity of patients and not being able to transfer them to other levels of care. ER visits brought in $295,000 less than budget and the lowest level fiscal year to date. Net revenue from normal operations brought a net loss of $1.4 million. Actual results are a net surplus of $3.7 million created by $5.1 million in special events, inclusive of $3.6 million of revenue recognized from (unintelligible) programs. EBIDA (earnings before interest depreciation and amortization) is $2.3 million, with a year-to-date loss of $675,000. Yesterday, we had 43 days of cash on hand."

Browne asked: "Don't we usually get this report in writing?"

Edwards said it used to come into email. "I asked Scott yesterday to get these reports to us."

Salas said he has a constituent and neighbor who fell and broke a bone rather severely. "When she got to the hospital, they told her the orthopedic surgeon wouldn't answer the call. Is that standard?"

Landrum said it was not standard and he would address it offline, not in a public meeting. "We have two orthopedic surgeons in town. I will follow up with you."

Salas said she was flown out and therefore it was a loss of revenue to the hospital. "She had surgery and rehab elsewhere."

"We have someone in orthopedics always on call," Landrum said.

In his report, he said that he had fielded questions about the number of FTEs (full-time equivalents) at the hospital and what percentage have been vaccinated.

"We have 366 FTEs, with 453 comprising those 366 equivalents," Landrum said. "As of yesterday (Feb. 10), we have given 834 doses making it about 68 percent of our staff having received the vaccine. We got word yesterday that new people will start with the Moderna vaccine, because it's easier to transport and store. Those who have already receive the first dose of Pfizer, will receive a second dose of Pfizer. Although some restrictions have been lifted at the hospital, we are still under t only mandatory surgeries being performed. Our chief of staff (Dr. Brian Robinson) and chief of surgery (Dr. Michelle Diaz) look at every patient that needs a procedure. They decide whether it is essential. Some people are very much in need of joint replacements, and not being able to do them is significantly impacting our revenues. Gila Regional is an 80 percent outpatient hospital. We are a very sophisticated surgical critical access hospital that also delivers more than 300 babies a year. Right now, we have only two entrances open, the outpatient surgery entrance and the ER entrance."

Landrum noted that the previous day, the CDC said that if an area is crowded, people should wear double masks, one of the blue or yellow so-called surgical mask and a regular mask on top. He also said "Sam's Club and Walmart are getting a lot of vaccines."

To a question, Landrum said the recommendation was for double masking, because of the new variants.

To another question about the super-cold freezer that the hospital had ordered, because the hospital didn't need it, "we canceled the order earlier. We were told it was only for storage sites, so we were able to cancel it without penalty."

Billings said that Rep. Rebecca Dow told him that Health and Human Services Secretary Dr. David Scrase had told her that GRMC was deciding what surgeries to do.

"That's exactly what we're doing," Landrum said. "The decision is between the hospital and the two physicians, the chief of staff and chief of surgery."

Billings also said a constituent had complained to Dow that her surgery had been delayed many times.

"It has been a local decision," Landrum said. "State law is in the background. Each patient is perused individually. If the surgery has been postponed it has been justified."

He noted that the New Mexico Hospital Association is lobbying because they are not happy with the governor's order, because sometimes people get tired of waiting and go out-of-state. "The guidelines come from the state but are interpreted locally."

Billings said GRMC could be doing more surgeries if the state changed the definition of essential.

Edwards asked: "Are you saying that you are pushing the envelope?" to which Landrum replied: "Yes."

Browne said he had read that a surgery could be delayed for up to three months if it would not endanger the health of the individual.

The next article will get into public input and the regular meeting agenda.