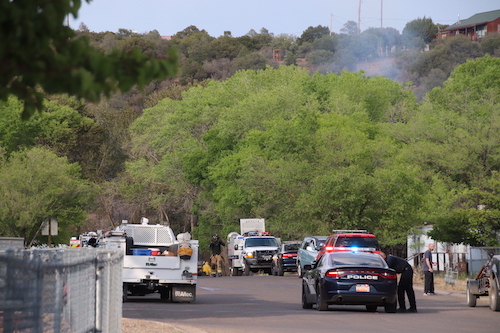 Fire off Cardinal Lane endangered homes, but no one injured. Photo by Mary Alice Murphy

On Friday, May 14, 2021, at about 5:33 p.m., eight minutes after they received the call, Silver City Fire Department firefighters responded to a reported grass fire in the arroyo on the east side of Cardinal Lane. According to Capt. Nathaniel Schwarz, the fire scorched about two acres, burning some large cottonwood trees and threatening several homes.

Schwarz told the Beat that three units and six people from SCFD were on the fire, while another three units and 10 people assisted from the Pinos Altos Volunteer Fire Department. The Silver City Police Department sent units and officers to provide traffic control.

No structures were damaged, Schwarz said, although one RV partially melted because of the heat. No injuries were reported.

The fire was extinguished in about two-and-one-half hours and firefighters left the scene at 8:03 p.m.