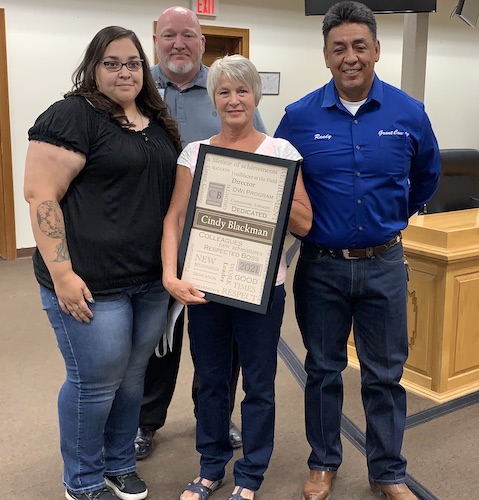 Cindy Blackman, center, who is retiring, is recognized for her 22 years as DWI Program director. On the left is Roxanne Saenz, behind her is Daniel Graves and on the right is Randy Villa.

[Editor's Note: With that headline, I'm sure you're expecting this particular note. This is part 1 of a multi-article series on the work session 060821 and later in the series article(s) on the regular meeting 061021.]

At the first of the meeting, District 3 Commissioner Alicia Edwards read from the recognition of Cindy Blackman, who is retiring from her 22 years of service as the DWI Program director.

"Cindy makes a quiet difference," Edwards said. "She has reached more then 20,000 kids with more than 250,000 hours of the anti-drug, anti-alcohol, anti-tobacco and anti-violence programs she takes to the schools. She has provided six hours of anti-alcohol training to every driver's ed student in the schools. Her goal has been to reach kids with evidence-based programming. She has emphasized life skills education, so the kids have the capacity to make good decisions and to have the self-confidence to actually say No. She has worked hard to develop the relationships with the schools to best use her time and theirs. Her programming starts with kindergarten. Students will have had contact with her programs 12 times before they graduate.

"She is especially proud of Corre Cantinas, a transportation program that allows adults to be responsible with their drinking, without endangering others. Thank you, Cindy, for all you have done for the kids of Grant County," Edwards concluded.

Randy Villa, General Services director and Blackman's supervisor, thanked Cindy for her more than 20 years of service. "Her commitment to make Grant County a better place to live has been her No. 1 priority. She accomplished so much with the program. She brought alcohol issues to the kids, teaching them that it is not cool to drink at a young age or too much at any age. She brought the consequences to the university students, so they understood what they could face with a DWI. She was so good at it she was often asked to train other directors across the state."

DWI Prevention Specialist Daniel Graves said he has been with the program for two years. "You have given me the tools to provide the information to the kids."

Blackman said: "I love this program. It has been my life for 22 years. Thank you for all your support. I'll still be here, and I'll volunteer."

District 1 Commissioner and Chair Chris Ponce also thanked her for her service. "When you were in Dispatch, you were great then, too. I thank you for everything you've done for the community."

With no public input on the phone or in person, the commissioners heard the audit results for fiscal year 2020 from Debbie Kreigel over the phone.

Kriegel said the report was submitted in accordance with county standards. "It shows all activities, and it shows the hospital as a component entity. The first item was the income statement. It shows net income of $2.31 million, which increased the county's equity. Next it shows each basic fund, with the general fund being the operating fund as the major fund. The reconciliation statement is for the major funds."

"Page 10 continued the funds, with page 11 having the reconciliation of the revenues and expenditures for each fund," she continued.

On page 12, the general fund showed that the county operated within its budget, so there were no budget violations. The fiduciary fund presents the property tax collection and disbursement. Page 14 has the hospital financial statement continued to the next page. Page 16 has the notes, with added information on what's included in the numbers. The following supplementary information was required by the state. It includes the pension information and a schedule for each fund, as well as a schedule for the rural volunteer fire departments.

Page 84 showed the capital project funds and next the smaller funds for their revenues and expenses. Page 89 showed the debt service numbers, and page 94 combined all the smaller, non-major funds. Other supplementary information included the entities for which the county collects on behalf of the entities. Other entries were bank deposits and tax roll conciliation. On page 102 are the joint powers agreements, as well as the legislative grants that are active during the fiscal year. Page 104 lists expenditures, with more than $750,000 being from federal funds and $1.8 million federal grant monies. On page 107 are the internal control and compliance for procurement.

"You had no findings, except for the late audit because the CARES Act funding was delayed by the federal government," Kriegel said. "There were no findings on the report on federal compliance with the public transportation grant fund. On page 112 is the one finding related to the late audit report. Page 118 showed the prior audit findings, with the one from last year being resolved in the 2020 audit."

She noted the audit has been uploaded to the federal audit clearing house for public view.

District 5 Commissioner Harry Browne asked who determines whether a finding is material or significant.

Kriegel said it is a" judgement call by us, the auditors. The late audit was not a material finding. It's a minor compliance finding."

Edwards complimented the county staff for the quality of their work.

Kriegel agreed and said that everyone was very professional during the audit.

The next article will address the Gila National Forest update.