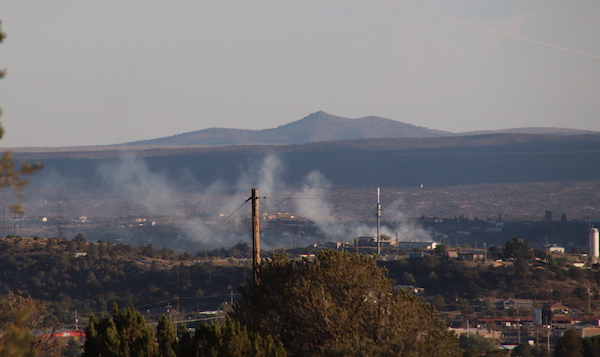 The Silver City Fire Department was paged out to a structure fire at 209 Mountain View Road at about 6:20 p.m. on Thursday, June 24, 2021. According to SCFD Chief Milo Lambert, a single wide residence and about 20 vehicles were damaged in the blaze which may have started "most likely in some stored materials." Also damaged were a camp trailer and a utility trailer.

Lambert told the Beat that Whiskey Creek and Tyrone volunteer fire departments assisted in putting out the fire which had increased to about one acre in grass across the road and down the hill from the Nazarene Church. The Silver City Police Department provided traffic control for the shut-down road and protection for the fire hoses which were lying across the road.

"It's a pretty complex investigation," Lambert said, referring to determining the cause of the fire which the state fire marshal will be investigating beginning today.

Crews left the scene at about 11:30 p.m. and according to Lambert a firefighter was stationed at the scene through the night and into today until the fire marshal arrives.

No injuries were reported.

The Tyrone Volunteer Fire Department was paged out about 7:15 p.m., also on Thursday, June 24, to a grass fire which flared up along Highway 180 – MM 103 (1 mile east of Mangas Terrace). Two brush trucks, a water tender, and eight firefighters responded extinguishing the one-acre blaze by 8:30 p.m.

As several vehicles pulling trailers were reported traveling toward Silver City earlier, Roger Groves, TVFD Chief said he suspects the fire may have originated from sparks from safety chains on the trailers.

The Grant County Sheriff's Office provided mutual aid with traffic control and, "may have knocked down some of the fire," Groves said.

No injuries were reported.