Photos of award and story by Mary Alice Murphy 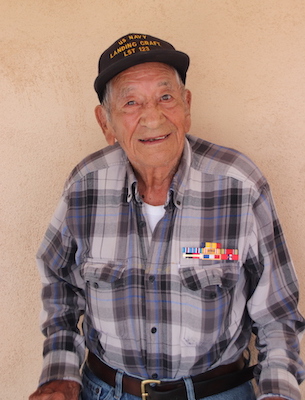 [Editor's Note: Thanks to Christopher Saxman for notifying me of the award and for sending me information about it.]

Christopher Saxman, Grant County resident, heard World War II Veteran Mario Kirker's story of shooting down a Japanese aircraft during World War II, when Saxman was having some upholstery work done by Kirker and his son.

"I saw his awards and saw that he did not have the Combat Action Ribbon among the awards," Saxman said. "As a fellow vet I wanted to help him get what he deserved. I looked up the regulations for a CAR, and then pasted in the parts where his combat experience qualified him and, along with some photos of Kirker, sent it to the Navy Records Department.

"Because Kirker is 95 years old and sometimes it can take up to a year to get awards, Saxman notified Sen. Martin Heinrich and solicited his help in expediting the award. Saxman acknowledged the help of Heinrich's Las Cruces staff member Juanita De Lira Gabitzsch. 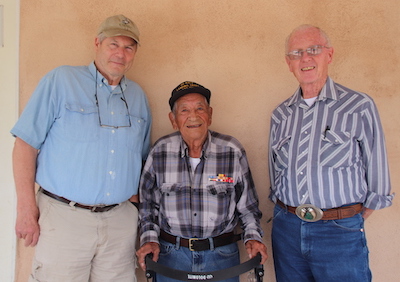 From left are Christopher Saxman, who applied for the Combat Ribbon Award on behalf of Kirker, center, along with Terry Humble, right.

Historian and long-time friend of Kirker, Terry Humble, read what he and Saxman wanted to say before pinning the award onto Kirker's shirt:

"Mario, we want to present you with your Combat Action Ribbon. We know you were overlooked at the time because of your race. You were passed over for several things you did while in the Navy during World War II, including shooting down a Japanese fighter plane. But, finally after 75 years you are now receiving the award and recognition you so richly deserve. Mario, your country thanks you."

Saxman said: "I first applied on Mario's behalf for correction of his Navy records in February of this year. I was notified today, July 20, 2021, 6.5 months later. Considering Covid, that's fast." 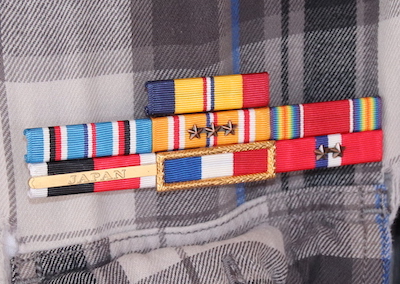 The top ribbon on Kirker's awards is the Combat Action Ribbon, belatedly awarded to Kirker, thanks to efforts by Saxman.

Saxman noted that the CAR award is pretty far up in the ribbon chart, which is attached below the following text.

{Editor's Note: The text in black is from the form. Text in bold  Italics was pasted into the form.

This is from the application, which is attached below this text in its entirety:

Mario arrived after beach was secured.

Mario's ship, the LST 123, was attacked 3 times by kamikaze pilots. Kirker was the first gunner on the starboard side. His ship got credit for knocking down 2 Japanese planes.

One Japanese plane armed with a torpedo dropped the torpedo in a direct line to hit the LST 123 loaded with Marines. Mario Kirker was ordered to shoot at the plane as it was making its approach. Mario could tell by the debris coming off the plane that he had hit it. He was then ordered to cease-fire but as the plane made another run at the ship he was again ordered to fire on the plane. As he was firing at the plane it began to smoke and then went into the sea.

The torpedo was still coming at the ship but just then another vessel passed between the torpedo and the LST 123. The ship exploded as it was cut in half and most of its crew was lost. The Japanese sank 20 LVTs so it is hard to know which ship this was. The 105-man crew of the LST 123 and the 150 Marines on board were saved by Kirker's actions.

Kirker's immediate superior Lt. Leon B. Butler made an incident report of Kirker's action to recognize him as shooting down the Japanese plane, but Kirker's captain refused to sign the order. Kirker is of Mexican heritage and back then, well . . .

Ships, including Mario's LST 123, were stretched out for miles as they approached the coast. First the ships were attacked by Japanese suicide planes. They went after the bigger ships and did hit two transport ships near the 123. As they approached the coast they were fired on by Japanese artillery. They made it to the beach and disembarked their 150 Marines. Mario wanted to fire his machine gun in support but could not do so because the captain did not give the order. The following day they returned to unload equipment. Just 200 yards away from Mario's position Gen. Macarthur landed on the beach to shooting in the air.

As the 123 approached Luzon, the Japanese, as Mario said, "Threw everything but the kitchen sink at us." The 123 made it through the fire unscathed. They off-loaded their Marines and made their retreat. Again, Mario did not fire his machine gun as he received no orders to do so.

[information from the form]

Kirker was a good sailor.

In addition to the CAR qualification, which includes the application, also attached is the correspondence to and from Heinrich, including the Kirker Closeout, and the USMC Ribbon Chart.