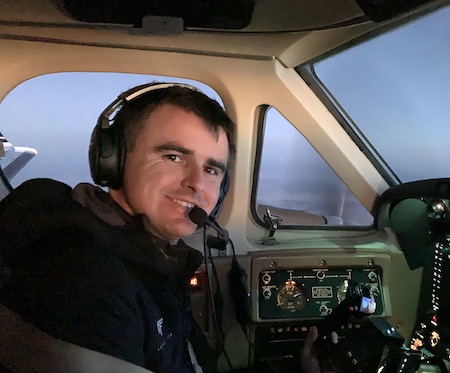 James Babinski, a captain with Advanced Air, who flies into and out of the Grant County airport, said he began his career with Advanced Air in November 2018, first based at the home airport in Hawthorne, Calif., and also spent a short time in Phoenix, Ariz.

"I have been with Advanced Air for three years this month," Babinski said. "However, when Covid-19 happened, I spent seven months in Bogota, Colombia, where my mother's family lives.

"It is a testament to the company," Babinski said. "I stayed in contact with management, and they took me back in September 2020. Within a few months, I became captain. I was flying as co-pilot and now I'm captain."

In 2015, he got his pilot's license and got his ratings at Santa Monica Airport and his first pilot job at Van Nuys Airport, California, flying a private jet for about 8-9 months.

"I had friends working at Advanced Air and they encouraged me to apply," Babinski said. "I started flying into Silver City six or so months ago."

He said his schedule varies, but he generally flies three to six flights per day, for example, starting in Silver City to Albuquerque, back to Silver City, then to Phoenix and back to Silver City. These are usually for four consecutive days. He noted that some pilots live in Phoenix.

"I'm 28 years old," Babinski said. "This is really good experience for me. I'm gaining a lot of experience measured in flight time. I also get lots of weather experience from the Silver City flights, everything from rain to snow to wind.

"Honestly, it's a great company," he continued. "The company has about 100 employees, and everybody knows everybody. We fly with friends, so when we spend the night in Silver City, we can eat with friends. A lot of the flights are pretty full, and we see a lot of the same faces."

Babinski said he was born and raised in Los Angeles. "A small town is a different experience for me. It's great because everybody knows somebody. Whether we're a Q's or Diane's or the Little Toad or any other restaurant, somebody may see us in normal clothes and notice us. They come up to us and say: 'I just flew with you three days ago.' It makes us feel very welcome."

When asked why he became a pilot, he said talking about it was a bit emotional for him right now. "My dad was a pilot in the Air Force for 24 years, so he inspired me to fly. He passed earlier this year, so becoming a captain two month after he passed was an emotional and fulfilling moment for me in my career."

He noted that when he first got his pilot license, "I was so confident, so excited that I asked my dad to be my first passenger. I let him fly from the co-pilot seat. He flew so much better than I could. It was a special moment for me. I learned that to be a good pilot I need to always be learning. There's always something different, from weather to the number of passengers. We have to know how to cope with the differences for it to be a safe and sound flight. All of us at Advanced Air take pride in safety and also in customer service."

About being a pilot, Babinski said: "I love the fact that I can wake up in my bed and in 24 hours I can be somewhere I could never have imagined being. It's a lot of fun, to have a dynamic career like this."

He said the essential air service flying "made me realize how important having flights available is to everyone in rural areas. It connects people to family and friends. Instead of a 41/2-hour drive to Albuquerque, it's a 40-minute flight at a reasonable cost."

Babinski said Advanced Air is good at hiring good people. "It's definitely a team effort. That goes as far as the fuelers and the airport manager. We want them to succeed as much as they want us to succeed."

"We all have some goal in mind," he said.

When asked if he had suggested any changes and if any of his suggestions had been followed, he said he believed that if something is an issue, "we have an open door with management in the company. We can go straight to the president if we have an issue. We might be told why things are the way they are, but they will take note. I personally haven't had any concerns."

He noted that at the end of the day, the aircraft goes into a hangar. If the battery on the ground support airplane tug is low, for instance, it is taken care of quickly.

"The company wants to make sure the pilots are happy and running a well-oiled machine," Babinski said. "We check each other out. At the end of each day, we want to make sure things are working smoothly. We can disclose internally what needs to be fixed and that goes directly to who can fix it. I've been fortunate to be with a company that is open to critique. It's a growing company. When I was hired, they had 50 pilots. Now they have about 100 employees. But nothing has changed with the culture. They tell us to speak up and they take action on what we say. It helps with our quality of life when we're on the road."

He said the crew stays at the Holiday Inn Express. "Every day a flight crew is there. Our rest period is 12-14 hours per night. The rest part is the most important and the next morning, we're back at it."

In comparing his life in California with the culture in Silver City, he said: 'In California, the only culture we have is traffic on the freeway. Oh, we do have beautiful beaches, but here in Silver City, everything moves slower. It's a different experience. Flying over the mountains is phenomenal. And you have the most beautiful sunrises and sunsets."

He said Levi Stockton, the founder and president of Advanced Air, has a great memory. "He's in charge of all these pilots, but he remembers the name of every one of us, even the co-pilots. Levi is also a pilot. When he's on the flight line, he's one of us. He is very fair. He's an all-around good person. He built this company full of great people. We rely on the honor system, and we can call him or our direct higher up at any time. They will always stop and help."

"I just have to say, we're really happy to be providing the essential air service to Grant County," Babinski said. "I have made great friends and when I go to a bigger airline, when I fly over Silver City, I will remember the good times and what I've learned here. A lot of the pilots have moved on to larger airlines, but they all say the same thing.

"You can't put a price on experience and friends," he continued. This company treats us not as employees, but as people. Instead of just a few days off when my father was ill, they gave me two weeks off, and I spent time with my dad until he passed. Our culture is incomparable. We want to see everyone succeed. When a pilot comes into the company with goals for bigger things, the company wants the pilot to succeed. When one of us gets an offer we can't refuse, the company supports us. As a captain, I like to mentor my co-pilots. When I became a captain, I understood their success is my success. It's really a fulfilling job. Aviation is a small world. You never know if the co-pilot you have today might one day be interviewing you for another job. We love being able to service Silver City, Albuquerque and Phoenix. I'm very thankful to be here."

He said: "We are all of the same mindset—the company is great to work for, actually not for, but with. We all get along!"