Bill Harrison celebrates… and celebrates some more… his 100th birthday 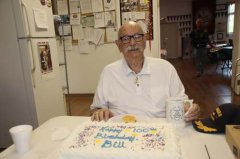 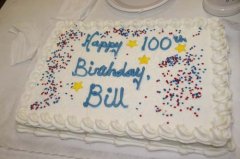 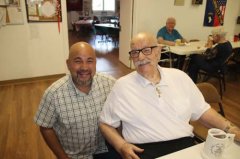 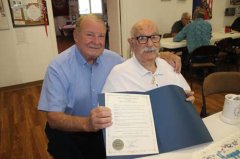 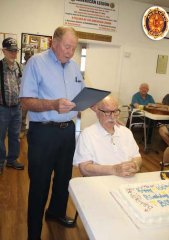 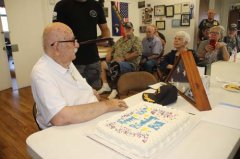 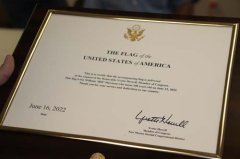 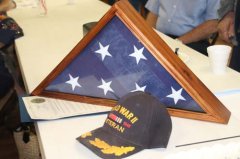 He said the celebrations kicked off a week ago Sunday when Crosspoint Church honored him and fellow World War II veteran Mario Kirker for their service.

A long-time Rotary member, Harrison celebrated on June 21, 2022, the day before his birthday, at the regular Rotary luncheon.

“I’ll be here at the American Legion Hall from 8 a.m. to 9:15 a.m., then I’m headed home,” Harrison told the Beat at the breakfast and cake cutting at the legion hall. The cake baked by Beverly Been was Harrison’s requested favorite carrot cake. He said all the celebratory cakes so far had been carrot cake.

“At 10 a.m., I need to be at home sitting in my wheelchair in the driveway, so people from my church (Good Shepherd Episcopal Church) can drive by with a hoot and a holler,” Harrison said. “I’ll be waving at them. At noon I will have lunch with my family.”

And the festivities won’t end there. On Sunday, June 26, a potluck honoring Harrison will take place at the Episcopal church after the service.

“I appreciate all the honors on behalf of me. Nobody gets to be this old without a team,” Harrison said. “It’s not I; it’s we, and I’m grateful for everyone, from family and friends to medical practitioners who have kept me going.”

He teared up when he said: “I had the most wonderful wife for 70 years. Today would have been our 75th anniversary.”

Harrison noted that he could not remain in his home without the help of Heather Ryan who takes care of him and his house and does his laundry, as well as picking up groceries for him,

The honoree centenarian said he had recently had the battery in his pacemaker checked and was told that it was good for another seven years. “I plan to outlive the battery.”

Harrison said: “God gave me the best birthday present with this rain.”

He was presented a letter and flag from Rep. Yvette Herrell celebrating Harrison’s 100th birthday. The flag was flown over the nation’s Capitol on June 16, 2022, specifically to honor Harrison for his life and service to country.

“I accept this and am honored,” Harrison said. “I accept this on behalf of everyone who has served on boards, commissions, councils and agencies.”

Silver City Mayor Ken Ladner read and presented Harrison with the proclamation of June 22, 2022 as Bill Harrison Day. Harrison served for many years as Silver City town manager. He also served as director of the Silver City-Grant County Chamber of Commerce, with a term as county commissioner, as well as Southwest New Mexico Council of Governments director.

“I’ve been city manager in Alaska, Oklahoma, Texas and last in Silver City,” Harrison said. “A life of service doesn’t start with you, but it ends with you. I was serving in Seward, Alaska, when we experienced the largest earthquake in U.S. history. I was town manager and emergency manager. We lost electricity, and water and sewer lines were broken. People stayed at the school, where they were fed for two weeks while repairs were made. The prostitute in town, whom I did not know personally [he emphasized to laughter], took up donations for a watch for me.”

He pointed it out on his wrist and said the band was made from a gold nugget and the watch was presented to him as a farewell gift, because he no longer had a job, with the destruction of the town and region. “That day I received a standing ovation let by the Alaskan governor. It was the greatest honor to be honored by my peers that way. I encourage you to get involved in service to others. The American Legion is my home here. I’m taking credit of these honors with wonder and awe, and with thanks to everyone else.”

Harrison cut the first piece of cake, saying: “I want the corner piece because it has the most frosting.” Everyone present had a chance to savor a piece.

Someone asked him how it felt being 100 years old. “It feels glorious,” Harrison replied. “I see the sun every day. I have family who takes care of me, and I have hundreds of friends. Tell everyone you love them, because you can’t after you’re dead.”

“I never faced a shot and never took a shot,” Harrison said.

His parting words were: “If you have a problem with God, take care of it. It’s because of Him that I’m here and have done what I’ve done.”

And Harrison was out the door on his way home to the hoot ‘n’ holler to continue his 100th birthday celebrations. And maybe one more carrot cake?