Photo and article by Lynn Janes 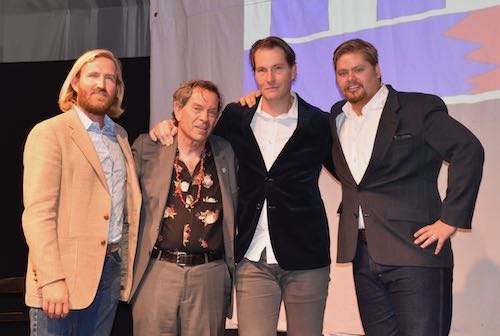 On September 9, 2022, and for the next two days Teatro Paraguas and Virus Theater presented the play "Save the Bees" at the El Sol Theatre. Duchess Dale directed the play and Geoffrey Pomeroy and Noah Segard starred.

Although the play had been based on fictional situations, its inception came from a real situation in the legislature between two real senators here in New Mexico.

The real situation that inspired the author NM State Senator Bill O'Neill to write the play started with a bill that had to do with saving bees. O'Neill represented the Democrats, and his counterpart NM State Senator Cliff Pirtle represented the Republicans. O'Neill represents a very progressive Democrat base. Pirtle represents a very conservative Republican base. Although everyone wants to save the bees the bill would hurt the farmers in the rural areas. O'Neill voted against it knowing his base would be very unhappy with him.

This inspired O'Neill to write this play and get it out across the state to encourage dialogue among people. Something that has been very much missing for some time. O'Neill said he had come from a staunch Republican family, but he still had good discussions with them. Today the legislature and people have lost the ability to talk with the other side.

The play did start with the save the bees bill but then went on to contemplate various other made-up bills to cross before these two senators. The play explored them voting the opposite of what they would have, how they felt and how it affected their re-election possibilities. Each bill addressed very real and polarizing issues like abortion, voting laws, redistricting and gun control.

In the play, gun control—does either understand the complexity of both sides? Has the Democrat even been to a gun show, shot a gun or hunted? Have they thought about how it would affect the rural New Mexican? Has the Republican considered the shootings?

Each tried to explain the reason for voting opposite what their base would want. It made some interesting points to ponder for the audience. Although giving real and polarizing issues for the audience to think about O'Neill interjected a lot of humor and made the play fun.

O'Neill said he had been hoping this would spur dialogue between the parties and people. The play will be done in some of the schools and acted by the students to get them talking. It has also played in a few places across the state with great reviews. One of the themes repeated through the play and by O'Neill, "We can do better."

An audience member asked about some current issues, lobbyists and unions. O'Neill said the play would be a work in progress and would add in some of these issues.

Senator Siah Correa Hemphill attended and asked O'Neill and Pirtle what bipartisan legislation they planned on taking to the legislation. The answer given had to do with Daylight Saving Time.

Several of the audience members expressed how much they had enjoyed the play and it shows not everything is black and white.

Pirtle explained the challenges they face with bills. Sometimes a bill gets a bad name and even though they have gone in and fixed the problems it has been hard to get that out to the people. O'Neill said this goes back to the bees. He had to explain to his base how much it would have hurt the farmers. He said they need to save the bees, but it needed to be done in the right way and conveying that to them had been a challenge.

Career politicians came up in the conversation. O'Neill said he did not believe in term limits because it took a while to learn how to do the job and time made him better. "Term limits are elections."

O'Neill said the division happening has really hurt him and he hoped that this play would help open the dialogue with everyone. "We are together, we are Americans." Pirtle said when he first started ten years ago everyone got along and they had been cordial to one another and respectful. After the vote everyone moved forward. Now if you vote differently, they don't like you and hold it against you.

A discussion started about donations and where they came from. O'Neill said some would not take lobbyist donations, but he had been fine with it. They also discussed corporate donations and foreign monies. Pirtle said donations will be a personal decision of whom you accept from. He said where the money came from didn't matter; it was his constituents that mattered.

Pirtle talked about being for and against a bill but must look at the positive and negatives. O'Neill expressed some of the same sentiment.

The actors said that it was just a play for them, but it had made them think about how they felt about some of these issues. It had been an interesting exploration for them.

Segard asked the senators some questions about how they wrote some of the parts of the play.

An audience member asked Pirtle and O'Neill if they had any other political aspirations. O'Neill said he didn't, and Pirtle said he liked working with his local constituents and thought he could do the best there.

More information on future events of the Virus Theatre can be seen on their website www.virustheater.com. They also have a Facebook and Instagram page. Proceeds from the play went to benefit the Commons Food Pantry in Silver City.