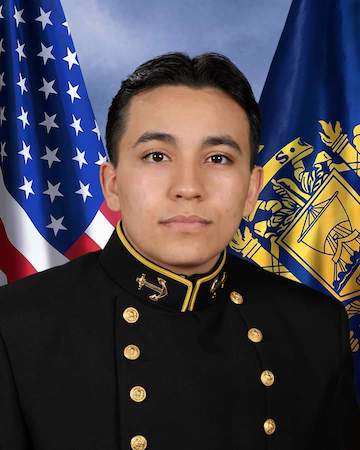 Robert A. Montoya, who graduated from Cobre High School in 2020, talked to the Beat about his experiences at the U.S. Naval Academy and why high schoolers should consider the academy for their higher education goals.

"I am a sophomore at the U.S. Naval Academy, a midshipman," Montoya said. "The academy chooses a few students to come back to their congressional district to do interviews to encourage potential candidates that the academy is the best place to apply when they are considering where to go to college."

He said the application process begins at the end of a student's junior year in high school.

Montoya noted the Naval Academy offers summer programs to encourage students to apply. They include STEM-related events for middle schoolers and even summer events for lower high school grades.

The Summer STEM program is for rising 9th graders, who have just completed 8th grade. They are also available for rising 10th and 11th graders.

Between 11th and 12th grade, there is an event called Summer Seminar, which offers a small insight into life at the Naval Academy.

"I was always interested in a career of service and also professional and leadership development and getting a higher education while serving in the military, so this was overall the best option for me," Montoya said. "The academy has given me a lot of opportunities I wouldn't have had otherwise in terms of leadership development and training. I've gone through two summers, the first an indoctrination summer. This past summer I spent a month in each of the service communities, going between Marine Corps, aviation community, submarine community and the surface warfare community. I also had the opportunity to take the Naval Academy's patrol shifts of midshipmen up to Boston and New York from Annapolis, Maryland. So far, my experiences of training have been top notch."

He has not made a decision on which service community to join. "I hope to have more chances to meet with mentors. The academy does a great job of incorporating officers that you can find on base, as well as senior enlisted that can help guide you in your choice of which community you want to be part of upon graduation."

To a question about why he chose to do this outreach, he said he thought it would be good to come back to his home community to reach out to students that might not even know about the Naval Academy. "They might have hopes of going into the service, so they might be able to get started in their application process."

He said during his outreach he has been back and forth between Grant County and Las Cruces. The previous evening, he had spoken to some potential candidates. One candidate had received his letter of assurance, so he would be going to the academy next summer, hopefully, if everything goes well. The morning of this interview, he had done several radio interviews and would be returning to Las Cruces the next day for another newspaper interview.

Montoya said his dad Robert Montoya, was a corpsman in the Navy in the late 1980s. "I grew up hearing his stories of being overseas in Okinawa. He was part of the Fleet Marine Force, attached to a Marine unit, at the same time and place as my uncle, John Montoya."

He recommended that those students who may be interested in joining the Navy through the academy should "focus on being a well-rounded human being. Go for as many leadership programs as you can. Get your grades up and take AP classes if you can. Do the best you can physically, joining sports and preparing for the rigorous physical standards at the Naval Academy, as well as helping out in your community. Do everything you can to be a better person, a more well-rounded individual."

He said at Cobre High School he was on the track team and cross-country team. "One year, we as a team, came in second in the district in cross-country."

"Good students who are looking for a high-quality university education should consider the Naval Academy," Montoya said. "You pay no tuition. You pay with your service when you graduate. You graduate with a great degree of your choice. I am currently an ocean engineering major."

He wanted to mention the varsity sports program available at the academy. They include football, men's and women's soccer and a vast array of other sports, as well as other sports in club and intramural activities. "Other activities, such as musical ensembles are also available. I started a mariachi group with my friends. I pay guitarrón."

At the academy, he participates in intramural dodgeball and is on the body-building team.

What does he like most? "I like the camaraderie that you build first from your company and now with the mariachi group, as well as the opportunities in education, leadership development and professional development."

As for his mentors, "I would mainly say my squad leaders, as well as multiple upper classmen that I've been able to talk to and get input from throughout the past two years, as well as from people who were in my shoes a few years ago."

"I would encourage anyone interested in the academy to begin the application process at the end of their junior year," Montoya said. "Even if they do not get in at the end of high school, re-applicants make up a major part, as well as enlisted service members. They can apply up to the age of 23 years. When they start their application process, they will be put in contact with a Blue and Gold Officer for this area. For this area, the officer lives in Las Cruces. Currently there are two officers in Las Cruces, and others throughout the state, but only one is assigned to Grant County."

He said he doesn't know of any local students who are interested at this time, but at the academy, he has made friends from the southwest with four from El Paso, one from Morenci, and one from Las Vegas, NM.

To apply to the Naval Academy and to get more information, students should visit https://www.usna.edu/Admissions/index.php