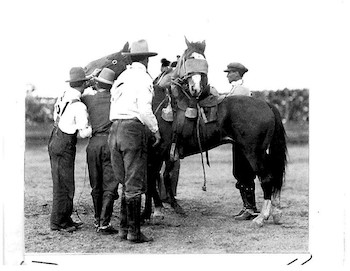 Don Turner will be the guest speaker at the Westerners’ meeting to be held on Tuesday, February 18, 2020 at 6:30 p.m. at the Silver City Cross Point Church Fellowship Hall.  It is located at 11600 Highway 180 East; mile-marker 116. Come join us for a delicious meal and Donnie’s presentation "Grant County Celebrations, Rodeos, and Anecdotes.”  This is sure to be fascinating, informative, and entertaining; so don’t miss this one!

His parents Beth and Allton Turner raised Donnie, his brother, and sister in Turnerville, New Mexico; a small town located between Hanover and Santa Rita.  Both of his grandfathers were Sheriffs of Grant County. Donnie has been married to his wife Susan for 54 years. Their two daughters, Tammy and Sherri, along with their husbands and 3 grandchildren live in the area.  Donnie has a real love of local history and old photographs which he enjoys sharing with the public. He also enjoys collecting historical memorabilia, books, and photographs and has quite a collection.

Don has given several presentations on the History of the Bataan Death March of WWII.  Turner is very passionate about this topic as he had two uncles who fought in WWII; Sgt. Joseph Kimbal Goforth and Maj. John Wesley Turner Jr.  Both were part of Battery G, 200th Coast Artillery. Goforth was a POW, and Turner Jr. was one of the survivors of the Bataan Death March who died later in the war. Along with his presentations, Don shared displays with his uncles’ pictures, Goforth’s mess kit, a canteen cup, leather leggings, medals, insignia patches, historical documents, a helmet, and a hat. Other items were pencil drawings and photographs of what prisoners went through during the march, maps, and statistical information about World War II. He acquired the memorabilia from yard sales, auctions, and magazines.  In 2018, Don took his Bataan Death March memorabilia to White Sands for their annual Bataan Memorial March.

At the Silver City Museum Annex, Don Turner along with Terry Humble presented the Brown Bag Program, “200th Coast Artillery, Battery G in Bataan.”  Don and Terry’s presentation centered around the residents of Silver City and Grant County who were involved in Bataan during World War II. These local soldiers defended the islands of Luzon, Corregidor, and the harbor defense forts in the Philippines. They fought in harsh conditions surviving on half and quarter rations. Turner and Humble also discussed the aftermath of their battle.

In 2019, The Silver City Museum celebrated rodeo weekend with special activities around its year-long exhibit, “Ranching in Grant County,” which included some local rodeo history.  Rodeo Day Outside, kids and adults alike practiced their hand at roping straw bale dummies instructed by Don Turner, a member of the Silver City Museum Society. Turner is also the honorable Sheriff of the local chapter of Westerners, a group of Western history enthusiasts.  He is a fourth generation New Mexican and is active with local service organizations and often volunteers his time and talents.

“Westerners is an international group dedicated to sharing and preserving the history of the American West. Westerners was founded in 1944 and has over 60 corrals (or chapters) in the US, and 20 corrals abroad, with over 4,000 members around the globe. Corrals generally meet for camaraderie and interesting programs on all aspects of Western history.  Anyone who loves the lore and history of the American West can join. Members range from local history buffs and readers and viewers of Western movies, to professional historians, educators, writers, and artists of all kinds.”

Our local chapter meets on the third Tuesday of every other month throughout the year beginning in February.  In December, the meeting is held on the second Tuesday. Dinner is served at the meeting, and the cost is $12.00 per person for members, $15 for non-members, and $5.00 for presentation only.  The public is invited to attend, and if you’re planning on joining us for dinner, you must make reservations with Mary Margaret Soule at 538-2888 (leave a message) on or before Sunday, February 16, 2019, in order to insure that enough food is prepared.