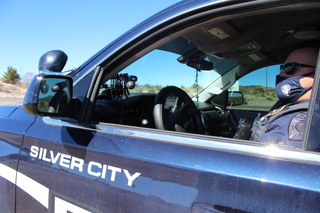 Silver City Police Sergeant William Lara patrols along New Mexico Highway 90.  Most categories of criminal activity in Silver City remained steady or declined in 2020, though residential burglaries, aggravated assault and vehicle theft increased from 2019.Silver City -- Silver City Police Chief Freddie Portillo recently completed a review of 2020 crime statistics and while most incidents of criminal activity remained steady or declined, aggravated assault with a deadly weapon, vehicle thefts and residential burglaries were up in Silver City last year. Larcenies, which include damage to motor vehicles, shoplifting and other property damage were down overall.

Though business break-ins dropped nine percent, residential burglaries jumped to 66 from 46, a 43% increase. Chief Portillo said he and his staff will be working hard to target the areas most impacted, though no one particular sector is more impacted than another.

"More officers will be targeting the impacted areas, and I have more plain clothes detectives out in the field to get these numbers down," said Portillo. "Officers are very pro-active and I'm confident that we'll see fewer burglaries in the coming months."

Burglaries and thefts often happen when opportunities present themselves, Portillo added, and encouraged residents to also be proactive by reporting suspicious persons or vehicles in their neighborhoods, making sure doors and windows are locked up at all times, and working together with trusted neighbors to help keep an eye on things. "We're all in this together," he said.

Motor vehicle crashes totaled 302, compared to 444 in 2019, a 32% decrease.  Captain Jason Woods attributed the decrease to proactive enforcement of traffic safety laws by patrol officers and perhaps less overall traffic due to COVID-19. Of the SCPD's 33 total sworn officers, 22 are assigned to traffic patrol.

"The public appreciates that we didn't let our foot off the gas, said Portillo, even though we were also busy dealing with mask enforcement and retail checks due to COVID.  "We've received a lot of positive comments."

"We hope that local motorists understand that our officers are out on the streets enforcing these laws to keep people safe," he added. Not surprisingly, most crashes occur Monday through Friday, over the lunch hour and when motorists are headed home. The most dangerous intersection is Highway 180 and Pinos Altos Road, followed closely by Hudson Street and Silver Heights Blvd., and Silver Heights and Swan Street.  Chief Portillo said he has made several requests to the New Mexico Department of Transportation for traffic safety studies, which have so far gone unanswered.

Capt. Woods reported that DUI (driving under the influence) arrests have steadily increased over the past three years, and more drivers are impaired by other drugs, especially methamphetamines, heroin and opioids.  DUI arrests totaled 71 in 2020, compared to 65 in 2019 and 53 in 2018.

"We are very proactive on DUI, and more of our offices are being trained as drug recognition experts, so that we can get more impaired drivers off the road."

The department has also applied for grant funding to implement a canine drug identification unit.

Drug use apparently is on the rise also, as the number of drug overdose calls jumped to 21, an increase of 10 over 2019

Domestic violence arrests were up 10% in 2020 at 136, compared to 124 in 2019. Officers were dispatched to 393 domestic violence calls, down from a total of 418 in 2019. Portillo said he suspects that increase is due, at least in part, to COVID-19-related stressors, particularly financial stress and job loss.

"We are committed to zero tolerance of domestic violence, said Portillo, and we are working proactively with the District Attorney's office to help ensure that offenders are prosecuted."

Portillo said he is committed to increased transparency within the department, and is working hard to improve data collection in order to publish monthly crime and traffic statistics and keep residents informed.

"The public needs to know what we're doing and why," he said. "We want everything completely out in the open." "The public appreciates this, and our citizen contact data shows that an overwhelmingly majority of comments are positive. The biggest complaints are about traffic issues, mostly speeding in residential areas, and requests for more frequent patrols."