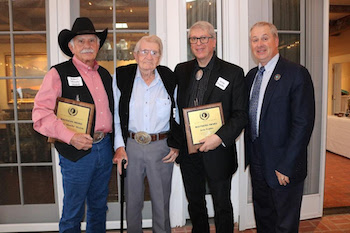 SANTA FE, N.M. -Today the New Mexico Film Office honors the life and legacy of Max Evans, a New Mexico film writer and real-life cowboy. The well-known author was born in Ropes, Texas and resided in Albuquerque until his passing on August 26, 2020, at the age of 95.

New Mexico would become the inspiration behind his American literary novels, which in the 1960's and 1970's became motion picture films that began a decade of some of the best Westerns ever.

“Max Evans was a real-life cowboy. From serving in the military, to taking on Hollywood, Mr. Evans leaves a legacy that is honorable and well-respected across many areas like film and television and agriculture,” said Economic Development Department Cabinet Secretary Alicia J. Keyes. “Mr. Evans was an American literary figure who painted life in the American West by his words that eventually made it to the big screen and set the stage for Hollywood to become fascinated with this part of the world, a fascination that still exists today. We are thankful for the legacy that Mr. Evans leaves us with and we send our deepest condolences to his family.”

What do you remember most about Max Evans?

“Max was a special family friend who I was most fortunate to connect with through the Rounders Award, named in his honor. Max spent some time in his youth growing up on a ranch on Glorieta Mesa. The rancher he was working with was Ed Young, who was one of my grandfather’s best friends. My time with Max led him to tell stories of spending time with my grandparents on their ranch. He was a true connection to my family heritage. He would also tell many funny tales, which I wish I would have recorded, because most of the time I laughed so hard, I could not remember the exact stories.“

What parts of New Mexico do you think Max would have loved to visit one more time?

“Max absolutely loved what he called “The Hi-Lo Country”, the basis for his book and film. That is the Northeast part of NM. He also loved the Glorieta Mesa area. A few years back, he met up with my dad, who took him to the Ed Young homestead area and showed him most of the Mesa where Max grew up. He told me many times how much that meant to him.”

What legacy has he left in New Mexico History and Agriculture as one of our foremost writers?

“Max is credited with being a pioneer in the NM Film industry and left a legacy of Agriculture. His work as an author and artist, along with his love of ranching has tied two dynamic cultures together. Every year, when I present the Rounder’s award, I have many western artists and many from the agriculture industry comment about the importance of the award and the fact that we bring a dynamic group together. I give Max all the credit.”

The Rounders Award is named after “The Rounders,” a classic western novel written by Evans. Created in 1990 by former New Mexico Agriculture Secretary Frank DuBois, the purpose of the award is to honor those who live, promote and articulate the Western way of life. A ceremony has typically been held each fall in Santa Fe, at which the New Mexico Secretary of Agriculture and Evans present the awards. All past recipients are invited, and many stories are shared. A total of 27 individuals have received this honor, including Evans as the inaugural award recipient.

Evans' novels would go on to become the basis for highly acclaimed Hollywood films.

In 1965 The Rounders, a film about two modern-day cowboys and an impossible to-tame horse, starred Glenn Ford and Henry Fonda.

In the 1970 film, The Ballad of Cable Hogue, a story of a hobo who is saved by stumbling onto a water spring in the middle of the desert, learned first-hand about the film industry from Director Sam Peckinpah.

In the 1998 Evans’ novel, The Hi-Low Country, a tale of two New Mexico cowboys returning home from combat service in World War II to find their town taken over by a corporation, which mirrored Evans’ own experience, was filmed in Bernal, N.M. and starred Woody Harrelson and Billy Crudup.

Amber Dodson, Director of the New Mexico Film Office added, “Mr. Evans was a pillar in developing the film industry’s fascination with the American West. New Mexico is the epicenter of that culture and because of early American literary works that became big screen films like those of Max Evans, New Mexico has remained linked to the film and television industry for decades. Mr. Evans lived a long full life and we are grateful for the contributions he made to putting the spotlight on New Mexico through his incredible work.”

Max Evans was a key contributor to founding the New Mexico Film Commission, the first of its kind in the United States. The commission was founded under former Gov. David Cargo and vans was a key in making connections to folks in Hollywood on behalf of the Governor.

In a prior interview, Evans said, "I went to Hollywood alone and on my own dime. I enlisted the help of my agent, Directors Sam Peckinpah, Burt Kennedy, and others. This resulted in a breakfast at the Beverly Hills Hotel. Fifty-seven major Hollywood producers and directors were there. Dave Cargo made a powerful speech about filming in New Mexico...The push for film in New Mexico started with him."

He is survived by his wife of 71 years, Pat Evans and their twin daughters Sheryl and Charlotte.