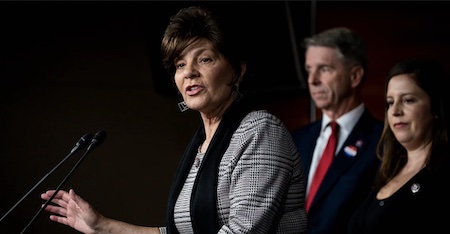 WASHINGTON – Congresswoman Yvette Herrell has joined her Congressional GOP colleagues in championing the new Commitment to America, a promise to the American people to deliver a strong economy, a safe nation, a future built on freedom, and an accountable government.

"The people of New Mexico deserve the opportunity to prosper and keep their communities safe." said Rep. Herrell. "I stand by our Commitment to America, and all the families who are tired of crime, broken borders, high cost of living, and politicians who won't protect the country we love. I am proud to be a part of this historic promise and this great fight for freedom."

Preamble of the Commitment to America

As Americans, we cherish our rights to life, liberty, and the pursuit of happiness.
We salute those who paid the ultimate sacrifice in defense of our freedoms.

And we embrace the responsibility to protect and uphold all that has made this nation the world's shining beacon of hope.

Unfortunately, over the past two years, Democrats in Washington have led America off-track.

They created crisis after crisis: from crippling inflation and rampant crime, to failing schools, border chaos, and disrespect for our nation across the globe.

Worse still, they have ignored our constituents' priorities and shown contempt for their values.
We will not allow it.

The Commitment to America represents a new direction and better approach that will get our nation back on track.

Because Americans are workers and builders, we commit to remove government-imposed obstacles to their success. Hardworking taxpayers should be valued, not punished.

Because no American should live in fear, we commit to reverse soft-on-crime policies that have caused violence in our communities. Public safety is a necessity, not a privilege.

Because Americans are learners and dreamers, we commit to advance excellence in education and respect for dedicated parents and teachers. Our future depends on it.

And because Americans deserve fairness and real accountability, we commit to make Washington finally serve the needs of the people. We can no longer afford business as usual.

We will work with anyone who shares these goals—as long as they put people before politics.
But the extreme ideology of this Democrat majority blinds them to the challenges of everyday Americans.

They are simply too partisan and out-of-touch to correct course now. So be it.

Starting Day One, we will work to deliver an economy that's strong, a nation that's safe, a future that's built on freedom, and a government that's accountable.

This is our Commitment to America. And in a Congress restored to the American people, we will do everything in our power to make it a reality.