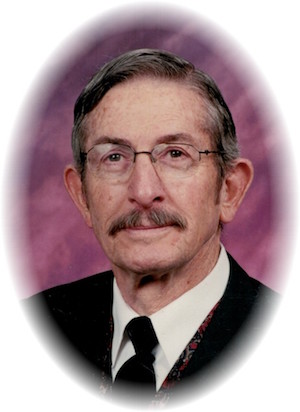 Robert Darrell Laughlin went to be with his Lord and Savior, Jesus Christ on July 10, 2021 in Silver City New Mexico. Robert Laughlin was born March 12, 1932 to Harvey and Verna Laughlin in Mounds Oklahoma.

Bob served in the Air Force from 1951 to 1955. He met and married Maryna Weeks in 1956. Bob worked for AeroJet in Southern California where he worked on developing jet fuels. He later worked at White Sands in the space industry for NASA where he performed lab testing on materials that would be on the space shuttle.

On the side, Bob enjoyed owning his own firearms and leather business. His talent for leatherwork was brilliant.

In 1984, Bob decided he was tired of the space industry and wanted a change. He applied and was accepted into the Sheriff’s department in Carlsbad, New Mexico. At the age of 52, he changed careers. He enjoyed the remaining 13 years at the department, working his way up to Major. When Bob retired, he and Maryna moved to Montrose Colorado where he continued his leather work. Bob and Maryna would venture on to live in Wyoming and back to New Mexico.

Bob was an accomplished artist. He dabbled in political cartoons and was published. Bob’s love of art extended to classical music and Opera’s.

“The last enemy to be defeated is death.” 1 Corinthians 15:26. Bob is more alive than ever walking with God.