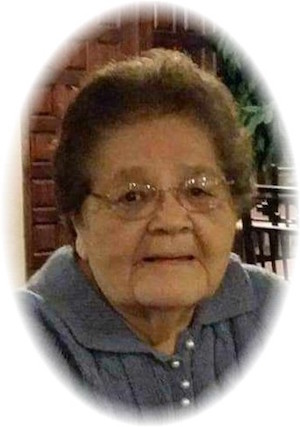 Magdalena J. Palomarez (Nena), 83, a resident of Bayard, NM entered eternal rest Tuesday, August 3, 2021 at her residence surrounded by her loving family. She was born May 29, 1938 in Los Angeles, CA to Zenon Jaime and Maria Villa. Magdalena was an active member of Our Lady of Fatima Church, as a Eucharist Ministry. She taught catechism for numerous years. Also, a member of the Santo Nino Society, De Colores Cursillista, involved with Our Lady of Fatima funeral ministry and the Guadalupanas Society. She was very much involved with their annual fiestas. She volunteered with community fundraisers. In her spare time, she loved playing bingo, and enjoyed going to casinos. One of her pride and joys in life was having family and friends visit and cooking for them, sitting around and reminiscing with lots of laughs.

Visitation will be Monday, August 9 from 5-6pm at Terrazas Funeral Chapels with the holy rosary being recited by Danny Legarda to commence at 6pm. The funeral liturgy will be celebrated on Tuesday, August 10 at Our Lady of Fatima Church at 11:30am with Father Martin Okonkwo officiating. Concluding service and interment will follow at Mt View cemetery in Deming, NM where she will be laid to rest next to her husband. Pallbearers are Eduardo Ortega Jr., Tim and Brandon Ortega, Raymond Villegas, Gabriel Rodriguez, and Manuel Palomarez III.  Honorary pallbearers will be the rest of her grandchildren.  Arrangements are with Terrazas Funeral Chapels “Trusted care for the ones you love” ~ 575-537-0777.  To send condolences, visit www.terrazasfuneralchapel.com.