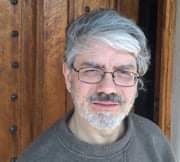 Glenn Henderson, 62, passed suddenly in Silver City. NM in the company of dear friends. Prior to residing in Silver City for a number of years, Glenn previously lived in the Hatboro, PA and Hillsborough, NC areas. Growing up in Hatboro, he graduated from Upper Moreland SHS, eventually attending Delaware Valley College with a major in biology. After graduating, he moved to Raleigh/Durham, NC area and was employed by Becton Dickenson and Revlon for many years. Eventually Glenn relocated to his beloved Silver City. Most recently he worked at the Western New Mexico University bookstore before his recent retirement and loved pet sitting. Glenn also practiced and taught Qigong and Tai Chi, leading classes at Lotus Center.

Glenn had many eclectic interests. He was a seeker of truth, spiritual rather than religious, with Eastern and Native American spirituality permeating his life.

An avid reader, he loved many genres of music, played guitar, and drew enormous enjoyment from hiking and being present in Nature. He also was a lover of all animals. As a youth, he played ice hockey and even coached a youth ice hockey team in North Carolina. Glenn also was engaged at different times in his life in community volunteering, having once helmed a small non-profit dedicated to preserving open spaces in his neighborhood in NC. He also worked at a non-profit theater in Silver City and volunteered in efforts to preserve the Gila wilderness area.

Glenn is survived by his loving and bereaved sister Judy Henderson (spouse Peter Stadelmeier), with his parents Donald and Elizabeth Henderson predeceasing him. In addition, Glenn was beloved by the Stadelmeier family to include Michael (Carolyn), Theresa Tresco (Frank,) Janet (Rob) and close caring friends Becky Glenn. Kathy Alberter, Elise Stuart and many, many others too numerous to name.

A memorial service is being planned with details to be announced soon. Cremation will take place at Terrazas Crematory. Arrangements are with Terrazas Funeral Chapels and Crematory “Trusted care for the ones you love” ~ 575-537-0777. To send condolences, visit www.terrazasfuneralchapel.com.