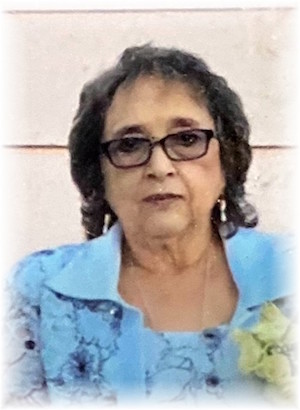 Esther Martinez Monje, 76, a former resident of Las Vegas, NV; now of Santa Clara, NM entered eternal rest Friday, May 6, 2022 at Genesis Rest Home in Silver City, NM. She was surrounded by her loving family. She was born October 17, 1945 in Santa Rita, NM to Eduardo B. Martinez and Rita Herrera.

She was a wonderful and caring mother to her three children and also a mother figure to others. Esther was a religious woman who had a deep faith in God and was also very devoted to our Lady of Guadalupe. She enjoyed spending time with her family and reading and watching the Hallmark channel. She loved butterflies and teddy bears. She will be greatly missed.

The holy rosary will be recited by Deacon Art Gutierrez on Tuesday, May 17 at 10am at Infant Jesus Shrine. The Memorial mass will follow at 11am with Father Casmir Anozie officiating. Concluding service and inurnment will take place at Hanover cemetery where both Esther and her husband will be laid to rest.

Cremation has taken place at Terrazas Crematory.  Arrangements are with Terrazas Funeral Chapels and Crematory “Trusted care for the ones you love” ~ 575-537-0777. To send condolences, visit www.terrazasfuneralchapel.cojm.