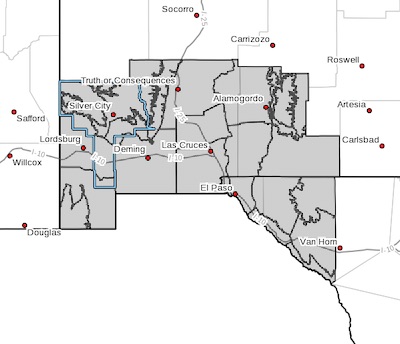 An active weather pattern is set to begin through the middle of
next week as a pair of storm systems are expected to impact the
area. The first storm will arrive Sunday, lasting into early
Monday morning. The second, more impactful system, expected to
arrive late Monday, lasting through early Wednesday. The biggest
impacts look to occur over the mountains but all areas could see
at least some minor impacts from wind and snow.

Sunday into Monday...
The first system will bring light to moderate snowfall
accumulations to the Gila region, including Silver City, with
rain and snow beginning prior to sunrise. Snow levels will
decrease from 7000 feet to around 5500 feet by evening. Elsewhere
across Southern NM and Far West Texas, scattered showers with a
few thunderstorms will be possible associated with a strong cold
front with best chances for rain west of the Rio Grande. Wind
gusts up to 55 MPH will be possible with these showers and areas
east of the Rio Grande with the frontal passage Sunday afternoon.
The Sacramento Mountains could see light snowfall accumulations,
but blowing snow could reduce visibility. Except for the
mountains, rain and snow should decrease during the overnight
hours; however, windy conditions will continue, especially for
east slope locations east of the Rio Grande.

Late Monday into Early Wednesday...
The stronger system arrives Monday night with precipitation
starting across the Gila before gradually spreading east
throughout the day and into the evening. Areas west of the divide,
and especially the Gila, will see the greatest impacts with up to
8 to 12 inches of snow possible in the higher elevations along
with 1 to 3 inches in the lowlands. East of the Continental
Divide, snow showers will be possible, even in the lowlands, but
amounts look light at this time, except for the Sacramento
Mountains where 4 to 8 inches of of snow will be possible. Winds
will not be as strong with this system, but breezy conditions will
lead to areas of blowing snow and poor visibilities.

Continue to monitor the forecast for updates along with watches,
warning, and advisories. Travel impacts are likely, especially for
the second system.