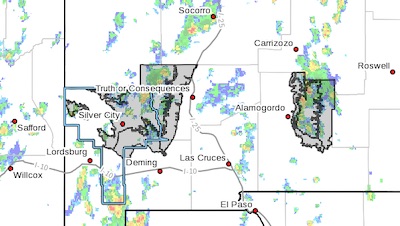 Heavy Rain Threat Continues in Area Mountains Through This Evening... .Showers and thunderstorms will develop once again this afternoon as a more monsoon-like pattern gets established. While locally heavy rain is possible areawide, the greatest threat for flash flooding will be over the Sacramento Mountains and the Gila region.

The Flash Flood Watch is now in effect for

* Additional showers and thunderstorms are likely over the
Sacramento Mountains, Black Range, and Gila Wilderness this
afternoon and evening. Heavy rains are possible across areas
where the soil is saturated. As a result any significant
rainfall across these areas could lead to additional flash
flooding today.

* Areas that have already received heavy rainfall will be
particularly prone to flash flooding, including the east
slopes of the Sacramento Mountains.

Do not enter or cross flowing water or water of unknown depth.

Stay away or be swept away. River banks and culverts can become
unstable and unsafe.