This diagram puts to rest the idea that CO2 is a threat to mankind.

“This diagram puts to rest the idea that CO2 is a threat to mankind.” By Peter Burrows, 1/13/20 elburropete@gmail.com - silvercityburro.com

The Heartland Institute is a well-known free-market think tank based in Arlington Heights, Illinois, covering everything from school reform to public spending. Since 2008, Heartland has hosted 12 International conferences on climate change, the latest in Madrid, Spain, as counterpoint to the UN’s annual COP conference which was held in Madrid this year.

The Heartland shadow conference didn’t get much, if any, press. Not surprising given that they are there to take the punch bowl away from the 27,000 attendees who travel the world to attend COP conferences every year, where they pass unenforceable laws curbing carbon dioxide, CO2, emissions. (See my blog of 12/20/19: Cop25: Another reason to get out of the UN.)

I know some of you are thinking, “Serves ‘em right, Burro. Anybody who says CO2 is not a problem SHOULD be ignored by the press, right up to the point where they swing from the gallows. Besides, even if the world doesn’t need saving from CO2, it sure as Hell needs saving from evil-dirty-bastard capitalists and if curbing CO2 can destroy capitalism, then by all means demonize CO2. The end justifies the means, Comrade!!”

Right. And Greta Thunberg is a warrior princess, not a sad little child.

One of the presenters at the at the Heartland conference was William Happer, professor emeritus of physics at Princeton University. Best known for his pioneering work on laser-guide star adaptive optics, Happer recently resigned as technology adviser to President Trumps’ National Security Council when it became apparent the Trump administration was not going to challenge the climate change hysteria with the scientific rigor Dr. Happer wanted.

Here’s a 19-minute video of Happer’s presentation. At about minute 9:25 he states that the science can’t be disputed; at 13:50 he states that the CO2 effect is “saturated” and that adding more CO2 is analogous to putting a second coat of red paint on a house: doesn’t change the color much.

For those of you who would like a hard copy of Dr. Happer’s graphs, blogger Donn Dears, a retired GE engineer, covers Happer’s presentation in two articles, “Good news for Humanity, Part 1” and “Part 2.” https://ddears.com/donns-articles/

This is from Dears’ “Part 1” article:

“Every newspaper and TV News Broadcast should have heralded the most important news story from Madrid in December. This diagram puts to rest the idea that CO2 is a threat to mankind. 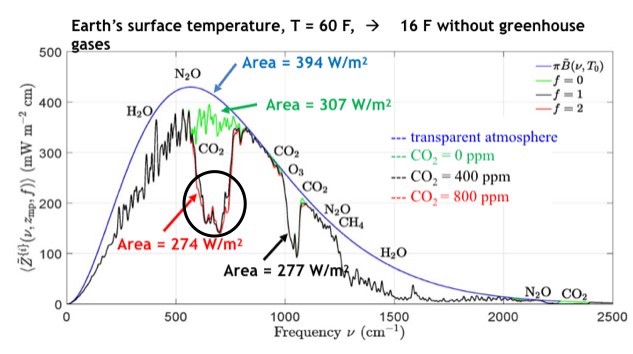 “The sawtooth curve shows the actual heat loss through the Earth’s atmosphere for each frequency, where the percentages of CO2 are 0 ppm, (in green), 400 ppm (in black) and 800 ppm (in red). The sawtooth curve is known as the Schwarzschild curve. (The heat loss for all other compounds are for conditions as they exist today.)

“Of particular importance are the circled, red and black, CO2 curves. These two curves, highlighted by the circle, are virtually the same, indicating that heat loss is nearly unchanged after doubling CO2 from 400 to 800 ppm.