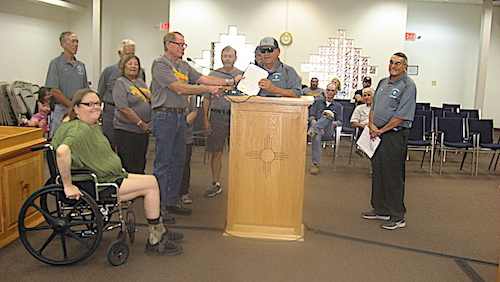 Article and photo by Roger Lanse

District 3 Councilor Jose Ray Jr. re-introduced his notice of intent ordinance at the June 11, 2019, town meeting, to amend the Silver City Traffic Ordinance regarding off-highway motor vehicles. His proposed ordinance, the same one introduced last year and defeated 3-2, would allow ROVs (recreational off-road vehicles) on town streets, excluding highways 15, 90, and 180. The vehicles, popularly called side-by-sides, would be required to have certain features and drivers would have to be 18 or older.

Ray explained that many elderly residents have expressed to him the desire to use their side-by-sides on city streets. Ray said to try it for a year and evaluate the ordinance after that time. He stated the side-by-side drivers are mature citizens capable of policing themselves.

Silver City Police Chief Freddie Portillo stated he still feels strongly against the ordinance seeing issues with public safety, noise complaints, and use on highways. Portillo stated that if the measure is passed by council, he would work to educate residents and to gather information to assess the law and report to council.

District 2 Councilor Lynda Aiman-Smith asked Town Attorney Robert Scavron if putting in all the processes of a new law on a trial basis was common. Scavron answered, “This’ll be a first.”

Ray admitted to a question from Aiman-Smith that there were no recreational trails within the town that side-by-sides could access from town roads as specified by state code. The other use allowing ROVs on town streets specified by state code is agricultural use where a grower would need to travel on a paved road to access property owned by the grower. These two uses allowed by state vehicle code are not applicable in Silver City, Aiman-Smith noted. She then read a statement in opposition to the NOI ordinance, based in part on a conversation with a DMV employee. Aiman-Smith continued, saying, “If the town of Silver City, without any recreational trail access in proximity, passed a law allowing an entire other class of vehicles to be legal on our streets, we open ourselves up for some weirdness in terms of liability.

“Since such a move would not be in line with the state law, it makes me wonder why indeed would we be doing it?” Aiman-Smith added.

District 1 Councilor Cynthia Bettison stated she felt about this re-introduced NOI as she did last year – not in favor. She suggested those desiring to use side-by-sides on town streets legally, to meet with legislators and attempt to change the vehicle code at the state level.

District 4 Councilor Guadalupe Cano stated she believes the conversation about this issue has about reached its limit in the community. She said, ”It’s something I hear about constantly from people on both sides, people who are neutral, and people who are interested in where this is going to go. I realize we have a stalemate. We probably will never change that, but I know that there are other ways to have this decided, including a special election.”

Ray then stated, “As of right now, we are the only municipality in the state of New Mexico that it is not allowable. We’re the only one. And, why we don’t allow it here is beyond me. If this doesn’t pass, then we will go and ask for a special election. The elderly people are the ones who have side-by sides and the mayor knows this and the chief knows this as well. We are all very responsible."

Aiman-Smith stated she was not convinced that every municipality has legalized this use and would like to double-check Ray’s statement because she is not sure that it is so.

Two council members, Ray and Cano, voted to approve the NOI, while Aiman-Smith and Bettison voted nay. Mayor Ken Ladner broke the tie by voting with the ‘yeas.’

Ray stated he met with two ladies who informed him about a several million-dollar program called SPIN, which would provide housing for mentally impaired people and the two ladies would be coming before council at some point to explain the program.

Ladner said the town is looking for volunteers to help plan the Territorial Charter Days festival on the Saturday nearest Feb. 15, 2020. He also said the rededication of the Greg Jaurequi Park on Spring Street in Ray’s district last Saturday went very well.

Town Clerk Ann Mackie requested approval from council for an ordinance amending the town’s municipal code regarding elections to agree with the New Mexico Local Elections Act. The amendment would provide for four-year terms for mayor and council members. Council approved the amendment.

Bettison asked council to approve a resolution expressing support for legislation amending the powers and duties of the New Mexico Municipal Boundary Commission, to give municipalities a greater voice in annexation issues. Council also approved that resolution.

Feel free to notify editor@grantcountybeat.com, if you notice any technical problems on the site. Your convenience is my desire for the Beat.

Disclaimer: If you find errors in articles not written by the Beat team but sent to us from other content providers, please contact the writer, not the Beat. For example, obituaries are always provided by the funeral home or a family member. We can fix errors, but please give details on where the error is so we can find it. News releases from government and non-profit entities are posted generally without change.