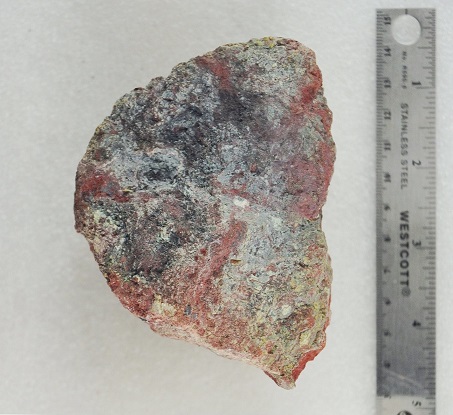 This is a sample of Cuprite from the Ground Hog Mine on December 7, 1994. Cuprite was one of the minerals that had been mined at this locale. (The photograph was provided courtesy of the Pacific Museum of Earth of The University of British Columbia.)

As you travel along Ground Hog Mine Road, you might wonder what was the Ground Hog Mine. You might find it interesting to know that beyond being a place where ore was extracted, it was considered by federal officials to be the potential site of what would have the largest population center in Grant County.

According to the United States Geological Survey (USGS), the Ground Hog Mine was first “discovered” in 1900, with 1915 being the first year of production. The USGS reported that a variety of products were extracted from the Ground Hog Mine, including copper, lead, silver, and zinc, among other metals.

The ownership of the mining claims for this property changed through the years. The Bulletin 870, Geology and Ore Deposits of the Bayard Area, Central Mining District, New Mexico, issued by the USGS in 1933, stated that Asarco Mining Company, a subsidiary of the American Smelting and Refining Company (ASARCO), purchased a 51 percent interest in the property in June of 1928. 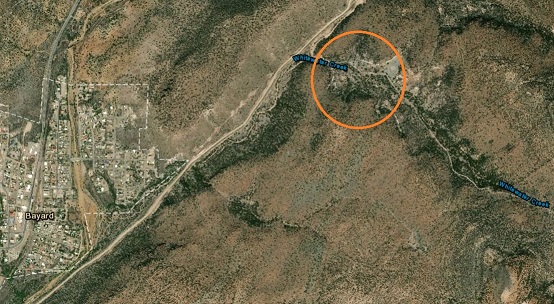 The Groundhog Mine was approximately located in the area encircled in orange on this map. The City of Bayard is located to the southwest of the mine. (This map was provided courtesy of the United States Geological Survey.)

The Bulletin 870 reported that 270,229 tons of ore had been produced from both the Ground Hog Mine and Lucky Bill Mine (a neighboring property) from initial mining through January 1, 1933; as of that date, “lead, zinc, copper, silver, and gold valued at $6,791,823 were recovered” from this ore.” To provide a perspective on the value of these metals, those metals would have been valued at more than $133 million in 2019, according to inflation calculators based on information from the United States Bureau of Labor Statistics. (The future valuation statistics used in this news column are from the same sources.)

The El Paso Herald-Post reported in its edition dated April 9, 1937, that “the Ground Hog Mine…is employing 350 men. It is the richest lead mine in the United States.”

Expansion of the mining at this property continued through the years, according to a news article in the Nevada State Journal of Reno. This newspaper reported on March 12, 1948, that “work has started on the sinking of a 2,000 foot, four-compartment shaft at the Groundhog unit mine.”

Smelters in Deming as well as in Amarillo, Texas, processed lead produced in the Ground Hog Mine.

The El Paso Times reported in a news article dated July 27, 1950, that “Metal miners now working in the Silver City area have obtained the highest wage ever paid miners in Grant County - $1.40 ½ cents an hour.” The key wage for miners at the Ground Hog Mine increased to $1.82 ½, according to a news article dated February 9, 1955, in The Arizona Republic.

Beyond use as an underground mine, the Ground Hog Mine was once considered to be the place where thousands of people from Grant County and evacuees from the El Paso Area would be housed if the former Soviet Union bombed El Paso.

A front-page news article in The El Paso Times on March 5, 1980, noted that preliminary plans called for Grant, Hidalgo, and Luna Counties to house thousands of El Paso County residents that would need to be evacuated in case of a Soviet missile attack. The newspaper explained that United States officials estimated that American cities would have three days to be evacuated, based on “observing Soviet evacuations of their cities.”

The same news article indicated that a survey by the Federal Emergency Management Administration “shows potential shelter for 94,198 persons” in Grant County. Of that number of people, “55,000 persons would theoretically fit into the abandoned Groundhog mine.”

Grant County officials quoted in this news article doubted “this figure would stand when actual living conditions are considered.”

To put 55,000 persons in perspective, that would have twice the number of people living in all of Grant County according to statistics from the United States Census Bureau in 2018.

Thankfully, no Soviet missiles ever were launched to destroy El Paso.