The Chronicles of Grant County
09 December 2020 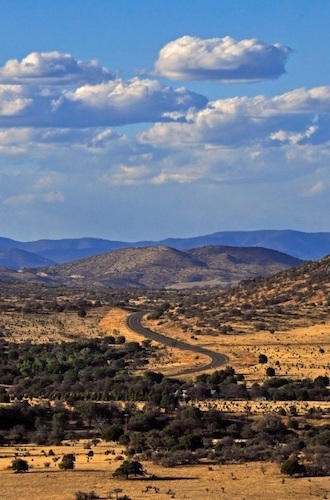 A view from White Signal looking towards Silver City. (The photograph was provided courtesy of Steve Douglas through Flickr, May 20, 2011.)

A small community in Grant County has its roots, like many other communities, in the mining industry. White Signal was initially named "White Quartz" by settlers with European heritage. On March 13, 1894, the Southwest Sentinel of Silver City reported that "What used formerly to be known as the White Quartz gold district adjoining the Cow springs district, is now being reorganized by the claim owners and has been named the White Signal district." Another news article – this one in the Deming Headlight on July 31, 1914 – noted that White Signal got its name from the white quartz dike [dyke] in the area. This news article indicated that "this white landmark was regarded as valueless, in a 'mining sense'..." until "copper ores [were found] a few feet below the surface." Gold and silver were also found, according to this news article, along with the copper.

In 1920, a form of radium had been found in White Signal.

The issue of The Columbus Weekly Courier on March 12, 1920, included "Radium Discovered at Silver City, NM" as a headline on its front page. The specific location of the discovery was noted as "just beyond the post office at White Signal." The news article reported that radium was "chiefly valuable for use in [therapeutics] and its wonderful effects in the treatment of cancer..."

Though the amounts quoted in a number of newspapers varied, radium was quite valuable in the early 1920s. The Columbus Weekly Courier on March 12, 1920, indicated that "radium is worth $10,000 a gram and there is not so much as even a pound of it in the United States. There was a time when it was worth $40,000 a gram." The Deming Headlight quoted the Silver City Enterprise that "Radium sells for $120,000 a gram" in a news article dated May 18, 1920. The newspaper in Deming indicated that the newspaper in Silver City reported that "...less than five ounces – 14 grams – of refined radium [existed at the time] in the world. Ninety grams of this - almost two-thirds - has been refined from Colorado ores."

The discovery of radium in Grant County prompted an invitation to a prominent scientist to come visit the area.

Marie Curie – Madame Curie – was "invited by the Silver City Chamber of Commerce to pay them a visit and inspect the radium mines in the White Signal district," according to a news article in the Deming Headlight on May 20, 1921. A news article dated May 25, 1921, in The Santa Fe New Mexican stated that the "radium-bearing rock" in White Signal was called torbernite. The headline indicated that "[Madame] Curie May Visit New Mexico."

Madame Curie was one of three people awarded the Nobel Prize in Physics in 1903. "The Nobel Prize in Physics 1903 was divided, one half awarded to Antoine Henri Becquerel 'in recognition of the extraordinary services he has rendered by his discovery of spontaneous radioactivity,' the other half jointly to Pierre Curie and Marie Curie, née Sklodowska 'in recognition of the extraordinary services they have rendered by their joint researches on the radiation phenomena discovered by Professor Henri Becquerel,'" according to Nobel Prize Outreach AB, 2020. In addition, the organization detailed that "The Nobel Prize in Chemistry 1911 was awarded to Marie Curie, née Sklodowska 'in recognition of her services to the advancement of chemistry by the discovery of the elements radium and polonium, by the isolation of radium and the study of the nature and compounds of this remarkable element.'"

There is no record that Madame Curie visited Grant County or New Mexico, but the discovery of radium at White Signal continued to have some impact nationally.

In a status report of the Smithsonian Institution from the Federal Government in 1921, the Department of Geology detailed a number of gifts to this museum: "Among the radium-bearing materials received are...torbernite from White Signal, Grant County, N. Mex., gift of the Radium Treatment & Sanatorium Co., Silver City, N.M." In 1922, the Smithsonian Institution reported an additional gift of torbernite from White Signal.

Long-term prospects for radium production did not appear likely, according to a publication printed in 1922. The Radium, Uranium, and Vanadium section, written by Mr. Frank Hess, of the Mineral Resources of the United States, 1920 stated that there was "not enough torbernite [that] could be found to make a valuable radium ore, even with hand picking."

The torbernite that was mined in White Signal was utilized in several ways, according to The Metal Resources of New Mexico and Their Economic Features Through 1954, published by the New Mexico Institute of Mining and Technology and the State Bureau of Mines and Mineral Resources published in 1957. This publication noted that "The [White Signal] District has yielded a small amount of radium-uranium ore, which has been used in drinking and bathing water and in the preparation of facial packs, toothpaste, and salves." 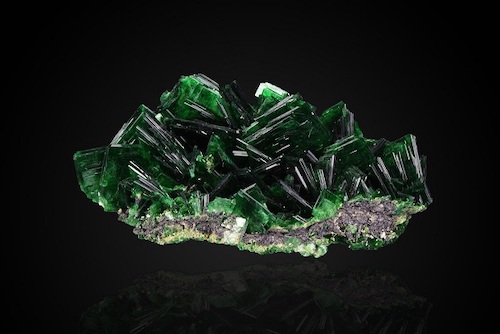 This piece of torbernite, about 5 cm in size, originated from Musonoi Mine in the Democratic Republic of the Congo. (The photograph was produced by Carlin Green and provided courtesy of the United States Geological Survey, circa 2016.)