The Chronicles of Grant County
24 February 2021 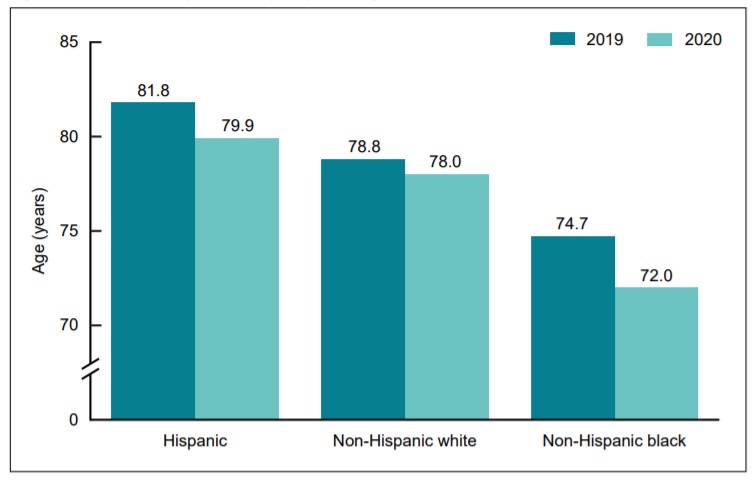 Last year, on March 4, 2020, The Chronicles Of Grant County reported that "…there is now a looming influenza that may or may not have substantial impact in the United States. As of today, there are no definitive statistics on key facets of COVID-19, the new coronavirus. Scientists do not yet have firm details on the extent of the spread of this virus as well as its mortality rate. Leaders have confirmed that someone could have COVID-19, show no symptoms of the disease, and be contagious to others."

Two documents were released this month that provide some initial answers.

According to these two documents, the life expectancy is likely less for two major racial groups – White Americans and Black Americans – as well as for a major ethnic group – Hispanic Americans. Approximately half of the population in New Mexico includes Americans with Hispanic heritage.

The impact on life expectancy for these 30 million Americans is unknown, thus far.

"Between 2019 and the first half of 2020, life expectancy decreased 2.7 years for the Non-Hispanic Black population (74.7 [years] to 72.0 [years])…It decreased by 1.9 years for the Hispanic population (81.8 [years] to 79.9 [years]) and by 0.8 year
for the Non-Hispanic White population," according to the report entitled "Provisional Life Expectancy Estimates for January through June, 2020." Non-Hispanic Black males, according to this report, saw their estimated life expectancy reduced by three years. This report was issued by the Federal government through the National Center for Health Statistics using information collected through its National Vital Statistics System.

"The provisional life expectancy estimates presented in this report are subject to important limitations," noted the authors of this report. "First, they are based on deaths that occurred during the first 6 months of the year [Year 2020] and do not reflect the entirety of the effects of the COVID-19 Pandemic in 2020, or other changes in causes of death, such as the increases in provisional drug overdose deaths through early 2020." The authors noted other limitations related to the "seasonality in death patterns in any given year" as well as the effects of the COVID-19 Pandemic in different geographic areas. "As a result," the report noted, "life expectancy at birth for the first half of 2020 may be underestimated since the
populations more severely affected, Hispanic and Non-Hispanic Black populations, are more likely to live in urban areas."

You can read this report by clicking here.

"We estimate life expectancy at birth and at age 65 years for 2020, for the total U S population and by race and ethnicity, using four scenarios of deaths – one in which the COVID-19 Pandemic had not occurred and three including COVID-19 mortality projections produced by the Institute for Health Metrics and Evaluation," the research article stated. "Our medium estimate indicates a reduction in U S life expectancy at birth of 1.13 years to 77.48 years, lower than any year since 2003. We also project a 0.87-year reduction in life expectancy at age 65 years. The Black and Latino populations are estimated to experience declines in life expectancy at birth of 2.10 and 3.05 years, respectively, both of which are several times the 0.68-year reduction for Whites. These projections imply an increase of nearly 40% in the Black – White life expectancy gap, from 3.6 years to…[more than] 5 years, thereby eliminating progress made in reducing this differential since 2006. Latinos, who have consistently experienced lower mortality than Whites (a phenomenon known as the Latino or Hispanic paradox), would see their more than 3-year survival advantage reduced to less than 1 year."

You can read this research article by clicking here.

The eventual impact of the COVID-19 Pandemic remains to be seen. 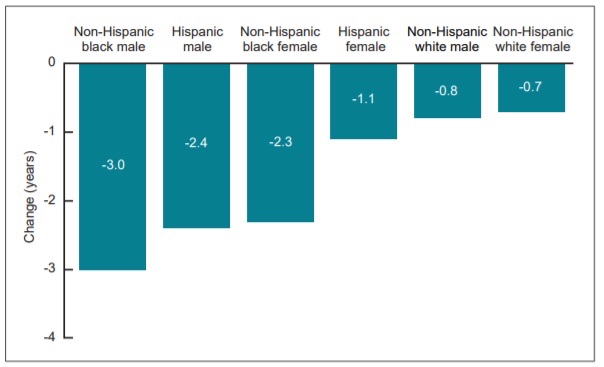 This image shows estimated decreases in life expectancies among certain racial, ethnic, and gender groups from Year 2019 to Year 2020 within the United States. Please note that these estimates are not final. According to the source of this image, the National Vital Statistics System of the National Center for Health Statistics, "estimates are based on provisional data from January 2020 through June 2020."