The Chronicles of Grant County
14 April 2021 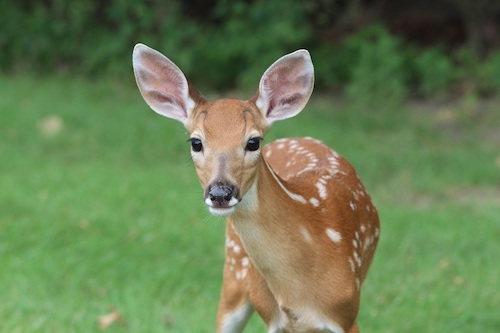 A fawn on the edge of woods. (The photograph was provided courtesy of diane616 through PIxabay, 2014)

Three roadways north of Silver City get their names from animals found in the wild. Fawn Court is named after young deer, Lynx Lane is named after the animal, and Wildcat Trail is named after wild cats like the lynx. These streets are located off of Old Little Walnut Road.

Deer are among the wildlife found in Grant County. Just north of this housing area is the Gila National Forest where deer can be seen in their natural habitat. In a news release from June 3, 2019, (a news release as valid today as when issued by the New Mexico Department of Game and Fish): "Please remember – young wildlife that people discover are simply hiding while awaiting their parents' return from foraging nearby."

"Removing these young animals can cost them their lives," Orrin Duvuvuei, department deer and pronghorn biologist, warned. "You might think it has been abandoned, but in reality, the mother is typically a few hundred yards away. In most cases, the best thing to do is just leave it alone and quietly leave the area."

Grant County – like all counties in New Mexico – is home to the bobcat. Formally known as the "Lynx rufus," you may see this type of lynx throughout the region, including in areas that have natural landscaping where these animals can blend into the surroundings. "Because bobcats rarely venture far from where they are born, they may live their entire lives in close proximity to people," according to a brochure issued by the New Mexico Department of Game and Fish. "They often may act apathetic or even nonchalant when interacting with people. This behavior is common and sometimes can unnerve a concerned citizen who is expecting the bobcat to run away swiftly."

The Department strongly discourages people to interact with this type of lynx. Among the recommendations it issued if you encounter a bobcat: "Back away slowly if the bobcat has not seen you…Talk loudly as you move away to make your presence known…Do not run…Appear as large as possible…If attacked, fight back, using rocks, sticks or hands…."

Beyond the animal most local folks know as the "bobcat," there are several other types of animals known as a "lynx." One, the Canada lynx, "is protected under the Endangered Species Act as a threatened species," according to the United States Fish and Wildlife Service. "Historically the lynx was found from Alaska across Canada and into the northern U.S. states…The lynx's long legs and large feet make it adapted for hunting in deep snow and its main prey is snowshoe hare. Canada lynx numbers and range expand and shrink in relation to hare populations. Its range in the lower 48 states included the southern-most extent of its range – with the southern-most range also expanding and constricting in response to hare numbers." The State of New Mexico indicated that "The only potential habitat for [Canada] lynx is high elevation forests in the San Juan and Sangre de Cristo Mountains. If you are not in this area, then you will not see a lynx."

Lynx are one type of wild cat in New Mexico. Another species of wild cat found in the State is the cougar. "Sometimes called mountain lions or pumas, cougars occupy all parts of New Mexico except the wide-open eastern plains," according to the New Mexico Department of Game and Fish. "Cougars are found in piñon, juniper and ponderosa forest, mountain mahogany and desert, oak brush and subalpine meadows. Where prey are plentiful, cougars likely are nearby. An individual cougar's range can encompass 10 to approximately 300 square miles,
depending on the terrain and available food. Their ability to feed on a wide variety of prey allows them to occupy many different habitat types." 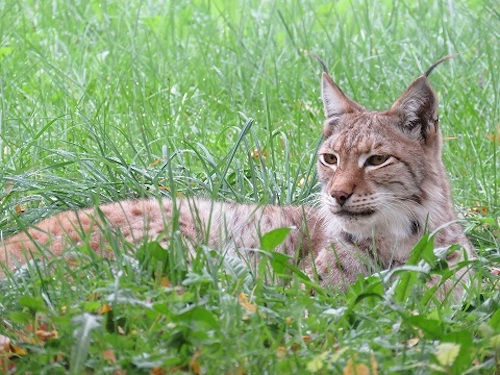 A lynx resting in some grass. (The photograph was provided courtesy of Ceuline through Pixabay, 2015.)