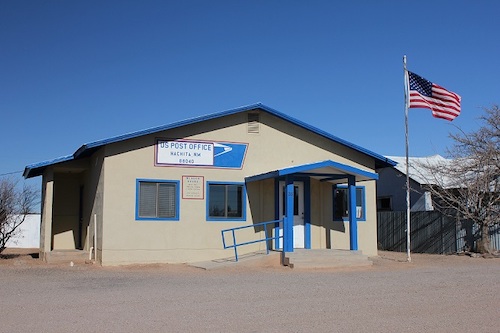 Hachita is served by its own post office at 26 B Street in Hachita. (The photograph was provided courtesy of Tom McLaughlin, January 15, 2013.)

Among the road names in Grant County, the sources of the names of the streets of Hachita are likely the most simple to understand. This rural community is located at the intersection of today's New Mexico State Road 9 (Railroad Avenue) and New Mexico State Road 81. South of Railroad Avenue is, in descending order, Avenue A, Avenue B, and Avenue C. These streets were named after the letters of the alphabet. Five blocks west of New Mexico State Road 81 is 1st Street. From that first roadway to that state route are the numbered roadways of 2nd Street, 3rd Street, 4th Street, and 5th Street. These streets were named after the numbers we use in everyday life.

The name "Hachita" has its roots in the Spanish words for axe ("hacha") and hatchet ("hachita").

What is called "Hachita" today is actually the second local community with that name. The first town with that name was located miles west of today's Hachita – in the vicinity of today's Playas Peak, according to the United States Geological Survey (USGS). The "Hachita" of today developed from the placement of the "…junction of the main line of the E. P. & S. W. [El Paso and Southwestern Railway] and the branch railway to Lordsburg and Clifton, Ariz.," reported the El Paso Herald on June 8, 1912. "It is the end of the division and the principal coaling station of the railroads, and many of the railroad employees make Hachita their home and headquarters, so as to send their children to school."

Hachita – the original one with that name – was actually first named "Eureka." The initial town with the "Eureka" and "Hachita" names developed from the Eureka Mining Camp where men working the nearby silver mining operations lived. The Tucumcari News And Tucumcari Times on December 12, 1908, reported details of the founding of the original settlement in the area: "The mining district which, embraces the Little Hatchet Range, was called Eureka by the first American prospectors who invaded the region about the year 1878. To the great surprise of these prospectors there were found a number of prehistoric workings at and near the mining camp of Old Hachita. The prospectors, elated over such an extraordinary discovery, called the district 'Eureka,' which name it still retains." The news article went on to explain that "these ancient workings were made in the mining of turquoise..." while much of the mining at the time of the news article (1908) "...was for lead, silver, and copper; within the last few years some zinc has also been mined."

The boom and bust cycle of mining towns of the West has played out in this section of Grant County. As people left the community, businesses and schools closed. The Hachita High School closed in 1965. Though Grant County retained the Hachita area as Hidalgo County was created years ago, students from this area were subsequently sent to schools in Hidalgo County after 1965. 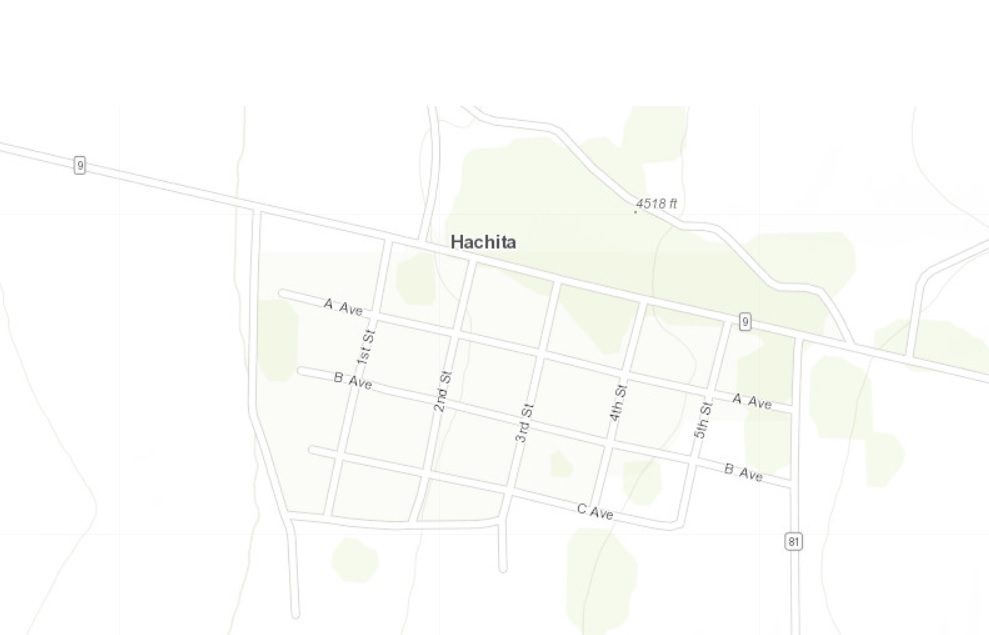 Hachita is located in the southernmost portion of Grant County. Streets here are named primarily after letters of the alphabet and numbers. (This map was provided courtesy of the United States Geological Survey, 2021.)