The Chronicles of Grant County
01 September 2021

san lorenzo steve douglas december 16 2012 65San Lorenzo is a rural community in eastern Grant County. "The Mimbres River is behind the tree line and Acklin Hill is in the background," according to the caption for this photograph of San Lorenzo. (The photograph was provided through Flickr by Steve Douglas, December 16, 2012.) [Editor's Note: The editor manipulated this photo to get rid of the over saturation and unreal colors.]

San Lorenzo is a small community located in eastern Grant County. The community's name is the Spanish wording for "Saint Lawrence." Prior to the community's establishment, this area was part of the Apache Nation.

Approximately eighty acres of land in the area are included in the San Lorenzo Historic District. The Nomination Form for San Lorenzo to be considered for inclusion in the National Register of Historic Places, a form submitted on September 10, 1987, by the State of New Mexico, stated that "The mining towns of Pinos Altos and Silver City, established in the early 1860s, are the only permanent settlements in Grant County which predate the occupation of the Mimbres Valley in 1869 and 1870."

According to the Nomination Form, San Lorenzo was founded by a group of nineteen miners and their families from Pinos Altos in 1869. At that time, the Nomination Form stated that an irrigation ditch was built and farming began here in the upper Mimbres Valley. "Corn, potatoes and vegetables were the first major food stuffs," according to this document. "Hay and alfalfa were widely grown for livestock to supplement the gramma grass of the surrounding hills. Apples, peaches, grapes and other fruit began to be planted in the early 1870s."

Settlement by individuals from outside the region happened over a period of time. The Nomination Form indicated that due to efforts ("attacks" is the wording used in the document) of the Apache to retain this territory, "…substantial buildings only began to appear in the late 1880s and early 1890s."

The population of San Lorenzo appears to have reached its peak in 1940, according to the Nomination Form. In that year, 476 people lived in this community.

The San Lorenzo Roman Catholic Mission Church is located at 3 E Street in San Lorenzo. A statement from the mission indicated that the structure was built of adobe in 1899. The Nomination Form stated that a "slender steeple [was] added to [church] tower in [the] 1950s [and was] replaced about 1984 by pyramidal roof based on earlier tower roof. [A] shrine and confessional of concrete block [that was] added at 'transept' in 1962 detracts little from the historic quality of the church because it is the same height as the nave and uses the same stucco and roofing material."

According to the Roman Catholic Diocese of Las Cruces, which includes ten counties in southern New Mexico within its jurisdiction, Sunday masses are held weekly at this mission.

A future edition of The Chronicles Of Grant County will detail the life of the man who became Saint Lawrence and whose name graces this church and the community. 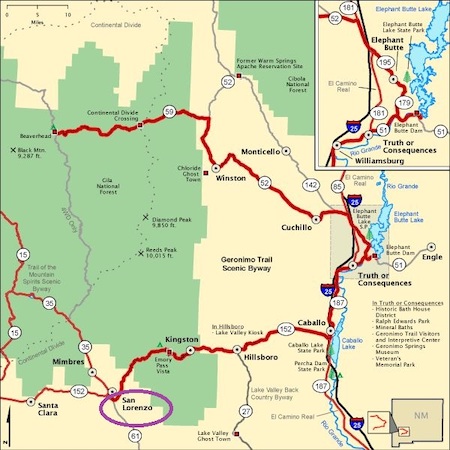 The Geronimo Trail (dark red lines on the map) connects San Lorenzo (noted in the purple circle) with a number of other communities in New Mexico. (This map was produced by the Federal Highway Administration of the U S Department of Transportation and provided courtesy of The U S National Archives and Records Administration, 2005.)

The Geronimo Trail (dark red lines on the map) connects San Lorenzo (noted in the purple circle) with a number of other communities in New Mexico. (This map was produced by the Federal Highway Administration of the U S Department of Transportation and provided courtesy of The U S National Archives and Records Administration, 2005.)