Pinos Altos When It Was Pino Alto

The Chronicles of Grant County
06 October 2021

Pinos Altos When It Was Pino Alto 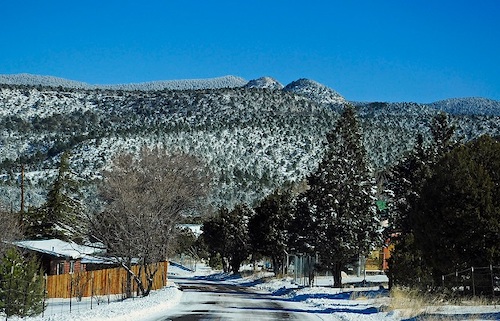 A winter scene in Pinos Altos. (The photo was provided courtesy of Steve Douglas through Flickr, January 20, 2013.)

Pinos Altos – "Tall Pines" in the Spanish language – was initially known by Spanish and Mexican coming through the area as "Pino Alto" – "Tall Pine." The name given to the area by the Apache people – the local folks who considered this home before settlement by outsiders – is not known.

On October 29, 1860, the Mesilla Times reported that a major gold discovery occurred at the "Pino Alto Mines." This, according to a letter to the editor that was published in the Santa-Fe Gazette on November 17, 1860. The news report indicated that there was "...gold in a branch of the Rio Gila [Gila River]...There is some difference of opinion as to what branch of the Gila the discovery was made upon, but, from our knowledge of the geography of the country, we think it is what is known on old Spanish maps, as the Rio San Joaquin, and more recently as the Rio Prieto."

Ten days earlier, the Daily National Democrat of Marysville, California, reported on the same dispatch from Mesilla; this dispatch was indicated that the initial news article was in published on the October 18th. "The amount of gold dust brought...is as follows: Second trip, $4,000; third trip, $1,500; fourth trip, $5,000; sixth trip, $1,000," according to the dispatch.

The wealth of the region became known far and wide. The Louisville Daily Journal reported on November 17, 1860, similar information from Mesilla. The newspaper also indicated that the group in Pino Alto was inviting "...1,000 men, well-armed and provisioned for six months, to join them." The New-York Times reported on its front page about the gold mining in Pino Alto on November 19, 1860. Newspapers from North Carolina to Ohio also reported on the wealth in Arizona.

The "well-armed" aspect noted by the Louisville newspaper was chiefly to fight the Apache. The Apache considered this area to be their home and did not welcome settlement by outsiders, whether they be from Spain, Mexico, or elsewhere. The Apache fought the outsiders to retain their ways of life and their lands.

Beyond the Apache, though, settlers also fought among themselves. In some cases, this was considered "honorable" among "civilized men." Consider a news article from the Mesilla Times on November 1, 1860, and reprinted on the front page of The Daily Bee of Sacramento on November 19, 1860:

"A duel occurred at the Pino Alto mines between Henry Kennedy and Sam Dyer. They fought at twenty paces with navy revolvers. At the first fire Dyer's pistol snapped, when he received a slight scratch on the knuckles from the ball of his antagonist. Both missed at the second fire, when the affair was honorably adjusted by the interference of friends, and the belligerents were much better friends than ever. The challenge was a peremptory one, and both parties stood up manly, and according to the [Mesilla] Times, 'showed that they possessed the right mettle for men who desire to live in Arizona.'"

Each of these newspapers noted that "Pino Alto" was located in Arizona. On November 10, 1860, the Daily National Democrat reported that a report from "...a Deputy Marshal…" stated that there were 500 people living in Pino Alto Mines, Arizona. A future edition of The Chronicles Of Grant County will explain how this area was part of Arizona, but not recognized as Arizona by Federal officials within the United States of America. 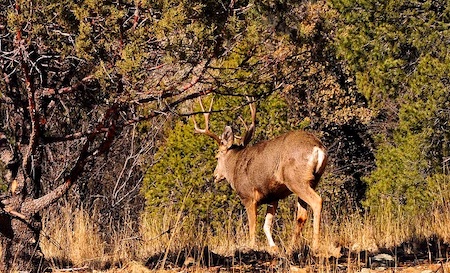 A  buck deer in Pinos Altos. (The photo was provided courtesy of Steve Douglas through Flickr, January 16, 2013.)