The Chronicles of Grant County
03 November 2021 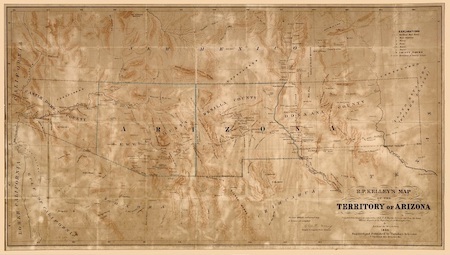 The lands in today’s Grant County were included in the proposed Mesilla County in the proposed Territory of Arizona in the United States of America. (This map was produced by Arthur de Witzleben and provided courtesy of the Library of Congress, 1860.)

The lands in that “Arizona Territory” were not the lands that eventually became the officially sanctioned Arizona Territory by the U S Congress. Instead, the proposed boundaries of the Territory of Arizona included the southern portions of what became the States of New Mexico and Arizona. The proposed territory stretched from California at the Colorado River to Texas at the Rio Grande River.

In 1856, residents in this area submitted a request to the U S Congress for this new territory to be created, according to a news article printed in The Daily Free Press of Burlington, Vermont, on December 15, 1856. The news article indicated that “The proposed Arizona Territory is said to have 15,000 inhabitants.”

This was one of several requests made to create the Territory of Arizona as part of the United States of America.

Though no action was taken in Washington to form this new territory, local folks considered themselves to be part of Arizona Territory rather the officially-sanctioned New Mexico Territory. On February 16, 1857, The Daily Picayune of New Orleans included note of “…the new Territory of Arizona…” on its front page. In the edition of the Los Angeles Star dated April 4, 1857, the front page included a news article from “Arizona Territory.”

President James Buchanan recommended “…the immediate organization of the Territory of Arizona…” according to a news article dated December 17, 1857, in the Monongahela Republican in Monongahela City, Pennsylvania. Some supported formation of this new territory, according to news reports at that time, because of the mineral resources – gold, silver, and copper, among other elements – found in the region. News reports at that time also indicated that others supported creation of Arizona Territory as part of a larger effort to acquire more land from Mexico, while some of those individuals saw an opportunity to add a new slave state to the country. On February 4, 1858, The National Era of Washington, District of Columbia, printed a news article that included note from the Sacramento Union newspaper indicating that “…the movement for the organization of Arizona is purely one of the slaveholding propaganda. A new purchase of land from Mexico is to be made, which will give the Territory population enough to demand admission into the Union.”

The U S Congress declined all of these requests to approve the proposed Territory of Arizona.

The Confederate States of America, though, did welcome the formation of the Territory of Arizona as part of that new nation. Mesilla was the capital of this new territory.

According to the Library of Congress, local folks gathered in Mesilla in March of 1861, and passed a resolution attaching the Territory of Arizona to the Confederate States of America.

The front page of the Santa Fe Weekly Gazette dated August 17, 1861, included a proclamation addressed “To The People of the Territory of Arizona” from Lieutenant Colonel John Baylor of the Confederate Army. He declared that he was taking “…possession of the said Territory in the name and behalf of the Confederate States of America.” Military personnel were to operate the government “temporarily” according to the proclamation.

Additional information on the Confederate Territory of Arizona, including one of the battles of that included Confederate soldiers in what is now Grant County, will be detailed in a future edition of The Chronicles Of Grant County. 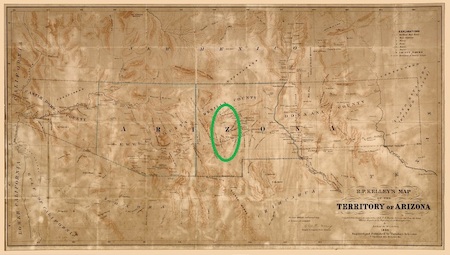 The area in the green circle on this map includes much of today’s Grant County that had been included in the proposed Mesilla County in the proposed Territory of Arizona in the United States of America. (This map was produced by Arthur de Witzleben and provided courtesy of the Library of Congress, 1860.)