Fireworks In The Sky

Fireworks In The Sky 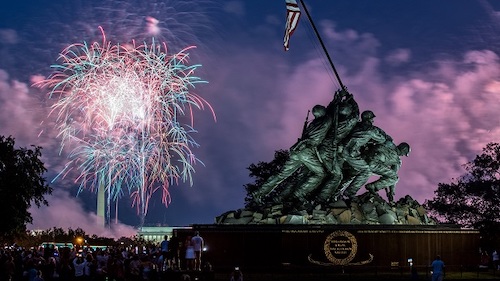 Fireworks were ablaze above Arlington, Virginia, in metropolitan Washington as the United States of America celebrated Independence Day on July 4, 2021. The U S Marine Corps Memorial, in the foreground, recalls the raising of the American flag at Mount Suribachi on Iwo Jima on February 23, 1945. (The photograph was produced by Lance Cheung and provided courtesy of the United States Department of Agriculture, July 4, 2021.)

In a letter to his wife on July 3, 1776, the future President of the United States of America, John Adams, wrote about the adoption of the Declaration Of Independence the day before. (Yes, the then-leaders of the U S adopted the Declaration of Independence on July 2 – not July 4; the document was read publicly to the people of Philadelphia on July 4.) In his letter to Abigail Adams (provided courtesy of the U S National Archives and Records Administration), John Adams wrote:

"But the Day is past. The Second Day of July 1776, will be the most memorable Epocha, in the History of America. — I am apt to believe that it will be celebrated, by succeeding Generations, as the great anniversary Festival. It ought to be commemorated, as the Day of Deliverance by solemn Acts of Devotion to God Almighty. It ought to be solemnized with Pomp...Shews, Games, Sports, Guns, Bells, Bonfires and Illuminations from one End of this Continent to the other from this Time forward forever…"

Please note that in his letter, when John Adams writes of "illuminations," he is using the term from that time for things we would call "fireworks" today. In the 1770s, others also used the term "rockets" to refer to "fireworks."

As you view illuminations – er, fireworks – this year, local residents might be pleased to know that some of the chemicals used to create the colors in fireworks come from minerals found in abundance in Grant County. (The actual minerals and chemicals used in specific fireworks, of course, could come from any number of locales within the U S as well as from abroad.)

According to a statement from the United States Geological Survey (USGS), one of those minerals is copper. A metal salt, copper chloride, produces the color blue in fireworks, the USGS reported in a statement dated July 2, 2020.

Other chemicals that produce the colors of fireworks, noted the USGS, include barium chloride (green), strontium nitrate (red), and sodium nitrate (yellow).

In addition, the USGS detailed that "other colors can be made by mixing elements: strontium and sodium produce brilliant orange; titanium, zirconium, and magnesium alloys make silvery white; [and] copper and strontium make lavender. Gold sparks are produced by iron filings and small pieces of charcoal. Bright flashes and loud bangs come from aluminum powder."

Fireworks are a wonderful way to celebrate the holiday, but safety is critical.

Many local folks are likely aware of the ban on fireworks on public lands managed by the U S Bureau of Land Management (BLM) in Grant County, but just in case, the BLM released a recent news statement confirming that "the use of exploding targets and fireworks is prohibited year-round on all BLM lands in New Mexico by statewide order."

The fireworks ban is one of the efforts by the Federal government, working with the State of New Mexico and local governmental entities, to reduce the danger of wildland fires in the area.

On Friday, July 1, the BLM lifted all of its fire restrictions on the public lands administered by the BLM in Grant County and other nearby counties. According to the BLM, this decision aligned its regulations with policies of other Federal agencies controlling public lands in the region.

Leaders within the BLM indicated that "while monsoonal moisture has largely reduced fire danger, it is important to always be aware of the conditions of the area you are visiting, go prepared to put your campfire out completely, and have a fire extinguisher on hand in case of a vehicle fire that could spread to wildlands. Please continue to park only in areas free of flammable vegetation."

"We appreciate the cooperation of everyone in preventing unwanted wildfires within the district," said William Childress, District Manager of the Las Cruces District of the BLM. (The office that controls BLM lands in Grant County is headquartered in Las Cruces.) "And with the upcoming national Independence Day celebrations…we want to remind everyone about the policy of fireworks on public lands."

"While recent moisture has decreased fire danger, some areas of the state are still extremely dry, and fireworks put our communities at unnecessary risk. Stay safe by following all Federal, state and local laws prohibiting fireworks this Fourth of July. Fireworks are prohibited on all State and Federal lands."

Among the recommendations from the Forestry Division are to "leave the fireworks to the professionals."

Given that not everyone may follow the law, the Forestry Division stated that "although you may not be lighting fireworks, your neighbors may have different plans. Enjoy your Independence Day celebration and rest easy by hardening your home to embers and flames. Don't lose your house to a spark gone astray."

Among the specific recommendations made by the Forestry Division include actions that individuals can take to protect their property: "Clean your gutters and roof to prepare your home for wildfire season and the Fourth of July. Reduce the risk of ember ignition to your house by preparing the five-foot zone around your structure. Create defensible space in the thirty-foot zone around your house so that you have a fighting chance to save it in the event of a wildfire."

Whether watching authorized fireworks in person, on television, or via the internet, please keep in mind the sacrifices made by men and women who have striven—and who strive today—to protect and preserve the United States of America.