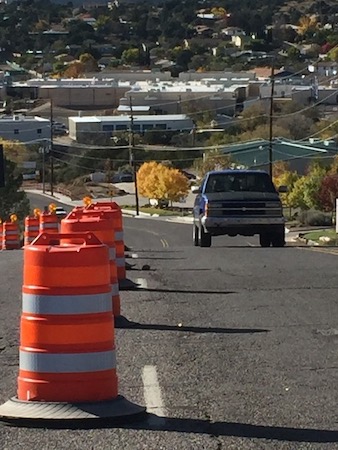 Silver City -- Silver City's 32nd Street will soon be "a nice, new street," said Peter Pena, director of the public works department, with only a small portion of needed funds coming from town coffers. Thanks to successful planning and grant writing efforts, the town will receive nearly $4.35 million for .75 miles of new pavement, construction to replace deteriorating or missing curb and gutter, new sidewalks, drive pads, ADA-accessible intersections, drainage improvements, and lane striping to include bike lanes, and new signage. The project spans 32nd Street from Swan Street to Pinos Altos Road and also includes construction of a bus shelter across from Silver High School, where the new community recreation center will soon become a reality.

"I'm pleased to say that we get a wonderful, well-needed project for a small portion of funds on behalf of the town," said Peña. "We're very happy because we can get this all done in coordination with construction of the new recreation center. It's always great when we can make such needed infrastructure improvements."

A request for construction bids is expected to be released in January, with a projected start date of April 1. The project is expected to take some six months to complete, and Public Works Department staff are already in contact with the Silver Consolidated Schools, Gila Regional Medical Center and local businesses that will be impacted by the four-lane road improvements.

"We understand that people can get frustrated by traffic delays," added Peña, "but those orange cones are a good thing. It means we're making headway on the list of needed road improvements. We'll do our very best to ensure that we always have some open lanes, but there may be traffic delays during construction."

The Town of Silver City received two grants totaling nearly $4.35 million; $2.176 million from the Colonias Infrastructure Fund plus $2.183 million from the New Mexico Department of Transportation (NMDOT), which together cover nearly the entire cost of the project. Approximately $332,500 will come from town revenues. The survey-and-design process was also funded by NMDOT grant funds.

Completion of major road improvements in process on Little Walnut Road is expected at the end of November, and the annual community development block grant (CDBG) improvements to town roads will focus on the south side of town. The project area spans East Daniel and East Dorothy streets from NM 90 (Hudson Street) to Elias Street, East Victoria Street from NM 90 to Bard Avenue, Bard Avenue from north of East Daniel Street to south of East Victoria Street, and Elias Street from East Daniel to south of East Dorothy Street. This project includes new paving, curb and gutter improvements, new ADA-approved sidewalks where possible, drive pads, signage and lane striping. Bike lanes are not included in residential areas. This project is expected to begin in June 2023.

For more information about road improvement projects, please contact Peter Peña, director of Public Works and Parks, at (575) 388-4640, or pwdirector@silvercitynm.gov.