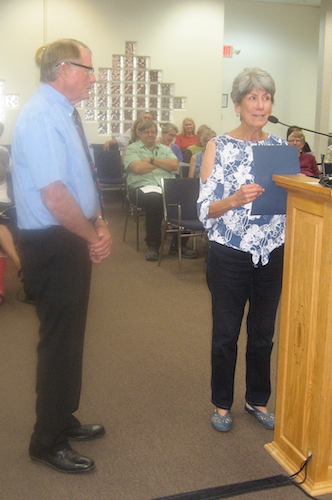 They say the third time’s the charm, but it took District 2 Councilor Lynda Airman-Smith four times to get her beekeeping ordinance passed. And then it was by a 3-2 vote, with Mayor Ken Ladner casting the tie-breaker. The ordinance requires beekeepers in town to register with the town and post a notice on their property warning passersby bees are being kept on the property. No fee is required to register.

An audience member, who stated he doesn’t have a hive but feeds bees, expressed concern that posting the location of a beehive would encourage theft of the beehive. He wondered since he also has tarantulas and a black-tailed rattlesnake living on his property if he will be required to post a warning about those as well. Silver City Police Chief Freddie Portillo told council that neither he nor his staff, in contacting departments in other states, could find evidence of an increase in criminal activity, including theft and vandalism, when the location of a hive is posted.

District 3 Councilor Jose Ray Jr. and District 4 Councilor Guadalupe Cano opposed the measure voting ‘Nay,’ Ray saying it was another ordinance taking away freedoms little by little, while Cano thought it promoted a lack of public safety because of possible vandalism due to the locations being posted. Aiman-Smith and District 1 Councilor Cynthia Bettison supported the ordinance voting ‘Aye’ with Bettison acknowledging she and many of her family have serious bee sting allergies and was concerned about emergency responders not being able to respond if bees are present.

Aiman-Smith reminded residents of events happening this weekend; a Pride Fest that’s taking place in Gough Park, a Friends of the Library book sale on Market Street, and the Gila River Festival.

Bettison stated that on Wednesday, Sept. 11, 2019, an event honoring those Twin Tower responders who perished and our local first responders will take place in Gough Park from 12 noon to 1 p.m.

Cano congratulated Bettison for starting her term as president of the New Mexico Municipal League saying it was a good thing for Silver City. She also stated that Portillo, Community Outreach Officer Manny Jaure, and Community Development Director Jamie Embick have started meeting in various locations in town to inform residents about community policing. Residents can call City Hall or the SCPD to find out when the next meeting is scheduled.

One resident spoke about scheduling conflicts at Scott Park between the soccer league and Little League baseball. Another was concerned because people were not able to use Gough Park over Labor Day weekend because of the park being closed off for events. Loud music from the Carnitas, Musica y Mas festival was deemed to be a nuisance by one speaker. And, a business experimenting with the manufacture of biochar and compost asked council for a letter of support.

An ordinance repealing a said-to-be unenforceable ordinance regarding vacant buildings downtown was approved by council. Town Manager Alex Brown told the Beat that a new measure is being drafted which would be enforceable and would have certain requirements to be met by the building’s owner(s), including proper upkeep and insurance.

Council approved two public celebration permit applications for the 6th Annual Oktoaderfest to be held in front of the Little Toad Restaurant on September 28, 2019, with alcohol service from 3-10 p.m.

A resolution allowing the town to work in collaboration with Silver Consolidated Schools and El Grito Inc. towards securing the Army Reserve Center property for a child care center and other purposes as required was approved. Misty Pugmire, El Grito Inc. executive director, spoke, asking council to approve the resolution so she can have it when she goes to Washington, D.C. later this week to meet with U.S. Senators Heinrich and Udall, and U.S. Representative Small.

Ladner appointed Sam Castello to the Planning and Zoning Commission and Anthony Chiaviello to the Municipal Library Community Advisory Group.