NMSU’s College of Agricultural, Consumer and Environmental Sciences, James P. King, a professor and associate department head in NMSU’s College of Engineering, and Erek H. Fuchs, the groundwater resources director for EBID have observed a significant amount of refilling of the Elephant Butte Reservoir after storage in the reservoir decreased to a very low-level the summer of 2018. However, this summer it refilled to ½ full storage. (Photo by J. Phillip King)Researchers from New Mexico State University, working in collaboration with the Elephant Butte Irrigation District, have determined that groundwater resilience can be quantified on a basin scale and have developed metrics to support integrated water-resource management and sustainability.

This summer, Carroll, King and Fuchs observed a significant amount of refilling of the Elephant Butte Reservoir after storage in the reservoir decreased to a very low-level last summer. Although, they were not able to see the groundwater beneath the land surface that is used, they were able to confirm the resilience in groundwater storage with return of increased surface-water flows in the Rio Grande.

The research team began its work by looking at the multiyear drought that began in the early 2000s and extended drastically into the 2010s. 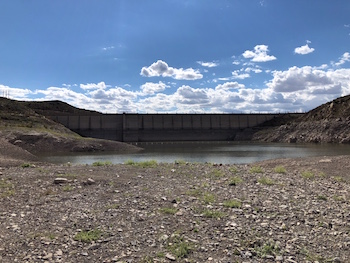 Currently, the drought is slowly easing up, according to the researchers, and there is now more water in the Elephant Butte Reservoir, which is about half full. But they cautioned that the area is not completely out of a drought and that a similar drought cycle is possible.

“One of the things we focused on is the irrigation and groundwater system in the Hatch area within the EBID. Hatch is centrally located in the Rincon Valley watershed, which features a small, geologically constrained and shallow groundwater system, but the Hatch population is also small and imports groundwater from the neighboring Nutt-Hockett basin,” Fuchs said.

According to the researchers, more and more farmers are pumping groundwater in the Southwest. The use of both surface water and groundwater is critical to agriculture in the EBID and the Hatch area, and virtually all river-connected irrigation projects throughout the world.

Fuchs also explained that he and the researchers looked at shallow aquifer storage changes in the groundwater system because the surface water and a potential for aquifer recharge comes back each year in varying degrees.

The research team found a very strong correlation between the annual amount of groundwater extraction for irrigation and the annual availability of surface water.

“When we have more surface water, farmers extract less groundwater, and when we have less surface water, they extract more ground water. This by itself isn’t at all surprising, and is in keeping with conjunctive water resource use as it has occurred historically in this area. What is interesting is that it’s almost a one-to-one ratio,” King said.

When there is a decrease in available surface water, there is a decline in storage in the aquifer within the year the decrease occurs. All recharge and when and how much it occurs, depends on flows in the Rio Grande and the diversion of that water for irrigation within the EBID.

The researchers created a metric to evaluate dependence on groundwater over time as a potential indicator of groundwater stress and, therefore, resilience.

He added, “This metric can be used by farmers on an on-farm basis, water policymakers and water managers alike to make more informed choices about groundwater resilience and sustainability of water in aquifer storage.”