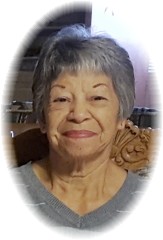 Guadalupe “Lupe” Maldonado Chacon, age 82, a resident of Bayard passed away peacefully at her home surrounded by her loving family on August 20, 2020. Lupe was born on October 13, 1937, in Clint, Texas to Soledad Flores Medina.  She was raised by her two loving aunts, Benita Flores and Margarita Madrid in Fabens, Texas, and was a proud graduate of Jefferson High School in El Paso, Texas. After high school, Lupe earned her certificate in cosmetology and worked as a Beautician for many years. In 1969, she met and married Jesus “Tutti” Chacon and she relocated to Bayard, New Mexico, where she made her home. Lupe worked at TG&Y, Anthony’s and Beall’s Department Store as a customer service representative for many years.

In addition, Lupe was a devoted Catholic and taught catechism at Our Lady of Fatima Catholic Church in Bayard, New Mexico for many years. Lupe loved being a wife, mother and grandmother and she could always be found in her kitchen wearing a “delantar” apron cooking and caring for her family. She loved listening to oldies, Mariachi and Mexican music and her singing could be heard throughout the home. She had a love for life and enjoyed traveling to Las Vegas, Nevada and visiting her grandchildren. She was a huge fan of the Dallas Cowboys where she attended three professional games at Dallas Cowboys Stadium.  Lupe was very unselfish and put others before herself. She was proceeded in death by her husband Tutti, her mother, Soledad Medina, her aunts, Benita Flores, Margarita Madrid and Beda Esparza, uncles Raul and Carlos Flores.

Visitation will be Wednesday, August 26 from 5-6pm at Terrazas Funeral Chapels with the holy rosary being recited by Deacon Art Gutierrez to begin at 6pm. The funeral mass will be celebrated on Thursday, August 27 at 10am at Infant Jesus Shrine with Father Casmir Anozie officiating. Concluding service and interment will follow at St.Vincent Catholic cemetery.  Pallbearers will be her grandchildren: Gabriel, Daniel, Isaac and Adam Martinez and Martin Jr., and Levi Castro. Honorary Pallbearers will be Marissa Castro, Adrianna Story, Marc Cavazos, Monica Cavazos and Susanna Flores. Arrangements are with Terrazas Funeral Chapels “Trusted care for the ones you love” ~ 575-537-0777. To send condolences, visit www.terrazasfuneralchapel.com.