Betty B. Gnader, 87, a resident of Silver City, NM 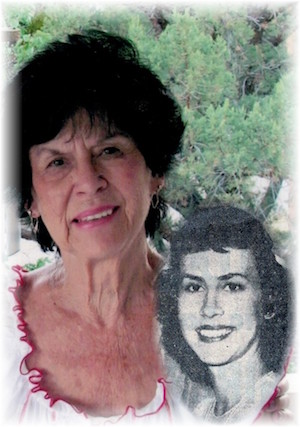 Betty Blanche Fehrenbach Gnader went to be with our Lord, Friday, November 26, 2021 at the Silver City Care Center. She was born May 5, 1934 to Maida (Hermann) Fehrenbach and Clifford Charles Fehrenbach in San Antonio, Texas. Betty was an excellent student in school, always priding herself for doing the very best. Music was always important in her life and she loved to sing. She and her best friend in high school DeAun Busby, sang as the “Gold Dust Twins” at Breckinridge High School in San Antonio. She used to tell us stories of riding in her brother’s old model A, in the trundle seat with her girlfriends, and how they use to go to the Frito Lay Co. also in San Antonio and buy a bag of freshly made hot cooked Fritos for 5 cents.

She spoke of her parents and brother and her driving to California and having to carry bottles of water to fill the radiator to keep it from overheating and soaking bandanas in water to tie around their neck to keep cool because they didn’t have air conditioning. But they traveled despite the heat and had wonderful adventures. Betty had lots of aunts and uncles who lived in the hill country of San Antonio, and always talked of her uncle who had an “um pa pa,” (German polka) band and they went often to dances and so much enjoyed dancing with everyone as a little girl.

Mother used to tell us that in high school, it was the in thing to have a chameleon, with a small leash, collared to a pin to wear on their clothing shoulder. Such fun memories she shared with her family. Then in 1952, she met the love of her life, Donald F. Gnader, while working at the Aztec movie theatre where he came, never to watch a movie but to talk to her. Her father came to pick her up every night and one day came with Don and said this young man tells me he’s going to marry you. They married in 1953. After Don’s stint in the air force, they settled down with their family welcoming a son and daughter in 1954 and 1956.

She was a wonderful mother, supporting her children in every activity they ever did. She was an admirable seamstress, making matching dresses for her and her daughter for every special occasion and award-winning costumes for school performances and Halloween for both children. She worked as a hostess, office manager, bank teller, Sara Coventry Jewelry and Tupperware home show hostess, but her vocation was being the best wife, home maker and mother for her children. Betty and Don took the family on annual camping vacations to New Mexico, Colorado, Utah, Montana, and Wyoming in the family van and pop-up tent camper making unbelievable memories, but the best being 3 trips in a row to Yellowstone National Park, riding the Silverton/Durango narrow gauge railroad numerous times, and a ride up Pike’s Peak on the tram in Colorado Springs. The family also went by passenger train to Milwaukee to see Don’s family almost every Christmas.

In 1974, they settled in Silver City following her best friend, DeAun and husband, Ed Busby, where dad became employed at Busby Motors Chevy, Olds and Cadillac dealership. Betty and Don became avid square dancers, and once again Betty made all her dresses with matching shirts for Don. Betty loved dancing and accompanied Don on many Elks Lodge conventions and enjoyed the activities and comradery of the organization. But camping was their livelihood and they now enjoyed it with their motor home RV going many places with the Elks and on family adventures. Betty loved her grandchildren and helped care for all four of them when they were toddlers. They went on many camping trips with Dustin, Kelsey, Derek and Kendra who remember her special love and attention to them all. Betty loved her rat terrier named Harley who passed away after she went to the care center.

A memorial service will be held on Friday, December 10 at 12 noon at Terrazas Funeral Chapels with Pastor Mike Dyndiuk officiating. Inurnment will follow at Fort Bayard National Cemetery where she will be laid to rest by her husband Donald F. Gnader (’07). A Celebration of Life Fellowship meal will take place at the American Legion Post 18 on College Ave after the burial.  Cremation will take place at Terrazas Crematory. Arrangements are with Terrazas Funeral Chapels and Crematory “Trusted care for the ones you love” ~ 575-537-0777. To send condolences, visit www.terrazasfuneralchapel.com.