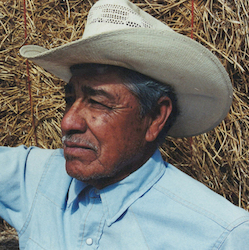 “Jimmy” as he was fondly known, was born November 27, 1925 in Gila, NM to Savas and Martina Munoz. He was raised on the Gila River. Growing up he worked on various farms and ranches. He worked for Fred McCauley Sr at the Packing Plant and worked on the WS Ranch in Alma, NM and participated on numerous cattle drives from Alma to Silver City. In 1944 he joined the US Navy and went to Camp Perry, VA for boot camp. From there he was placed in Seabee training and learned to run heavy equipment such as bull dozers, graders and cranes. He was stationed at Indian Head, MD where he was unloading captured bombs that were shipped there to be disarmed as well as other wartime equipment. After the war he returned home and married his wife, Betty Marquez. They were married 63 years until her death in October 2009.

Jimmy worked on various local ranches after the war. He worked at the Legal Tender Mine for seven years. In 1954 he went to go work for the 2C Cattle Company. He worked there for 11 years then went to go work for John Stark at the Rafter Diamond Company in Whitewater, NM.  He worked full time for 38 years until his retirement in 2003. Jimmy continued to work part time at the Rafter Diamond Company until 2018 when he could no longer drive a vehicle.

He is survived by his daughter Yolanda Aguilar (Richard); Grandchildren, Robert Morales (Kathy) who was raised as a son since he was an infant and Kevin Aguilar; great grandchildren, Matthew Morales of Vancouver, WA, Christopher Morales (Kristi) of Rio Rancho, NM, Bryan Morales of Albuquerque, NM and Kendra Aguilar of Portland, OR; great-great grandchildren, Angel Morales and Cannon Chase both of Rio Rancho, NM and Frank Mendoza who was also raised as a son.  Also surviving Jimmy are numerous nephews and nieces.  Jimmy was preceded in death by his wife Ignacia “Betty” Munoz; three brothers, Juan, Nicholas and Pedro; as well as five sisters, Camilla Gonzales, Guillerma Medina, Primitiva Peru, Alice Polanco and Nievas Gomez.