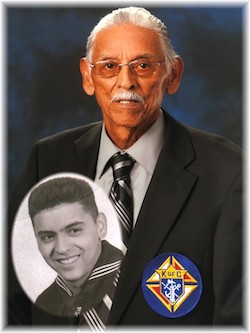 Ruben was a loving son, husband, father, grandpa (Popo) and Grandpa the Great.  Ruben married the love of his life, Susie Sapien in 1963 and was married for 48 years. Ruben was a man of great faith and a life-long parishioner of St. Vincent Catholic Church. He served the church in many capacities and served as a Eucharistic minister, lector, usher and on the Parish Council. He was a 4th degree member of St. Christopher Council 3388 and served as a Grand Knight. He also was a Cursillista and lived his Cursillo to the fullest. Ruben was a Veteran and served in the U.S. Navy from 1958-1962. He always said his time in the military was one of the best times of his life.  He worked for Phelps Dodge as a Diesel Mechanic.  He loved the Los Angeles Dodgers, Lakers, Raiders, going to casinos, playing bingo and gardening. He loved the outdoors, going fishing and hunting as often as he could.

Ruben was also involved in Silver City Little League coaching his sons’ baseball teams for many years. He impacted many lives during his years of coaching.  His greatest treasure was his family. Ruben never missed a game and was our biggest cheerleader (softball, volleyball, basketball, football, baseball, tennis, cheer) or any activity or celebration his children or grandchildren were involved in. Ruben had a great sense of humor and was the life of the party. Any time spent with him always meant lots of laughter. He was always up for an adventure and “ready to go.” Ruben was a strong, hardworking, intelligent, humorous man, who always put his family first.  He will be greatly missed.

Cremation will take place at Terrazas Crematory.  Arrangements are with Terrazas Funeral Chapels and Crematory “Trusted care for the ones you love” ~ 575-537-0777. To send condolences, visit www.terrazasfuneralchapel.com.