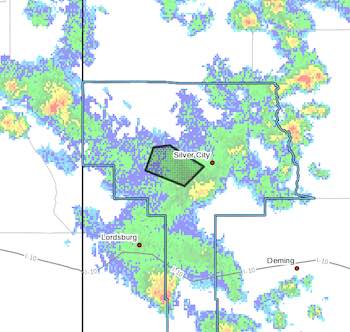 FLOOD ADVISORY IN EFFECT UNTIL 445 PM MDT THIS AFTERNOON...

* ADDITIONAL DETAILS...
- At 244 PM MDT, Doppler radar indicated heavy rain due to
thunderstorms. This will cause arroyo and small stream
flooding. Between 1 and 1.5 inches of rain have fallen.
- This includes the following streams and drainages...
Willow Creek, Gila River and Mangas Creek.
- Some locations that will experience flooding include...
Mangas Springs, Oak Grove, Mangas Valley, Bill Evans Lake,
Gila Middle Box and Tyrone Mine.

Mangas Valley Road south of US-180 may be impassable due to
low water crossings.
- http://www.weather.gov/safety/flood

Remain alert for flooding even in locations not receiving rain.
Arroyos, streams, and rivers can become raging killer currents in a
matter of minutes, even from distant rainfall.