Letter from Silver Schools superintendent on delayed opening on Nov. 29 and 30 for rapid antigen testing

As we prepare for the upcoming break, we want to share with you the district's plan for delayed start of school on November 29 when we return from Thanksgiving in response to the COVID-19 spread in Grant County. Silver Schools realizes that during the Thanksgiving Holiday individuals will gather with close family, friends and possibly people outside of the immediate household. To reduce the potential of spreading the virus, on Monday November 29 and Tuesday November 30, we will have a late school start; classes will have a late 2-hour delay to the start of the school/work day to ensure that your child is not unknowingly positive with Covid-19. We are inviting students, parents and staff who are interested, to take advantage of our free Rapid Antigen testing sites at the Central Office or at Cliff Schools from 7:00am – 10:00am.

If you or your child have symptoms, (recently manifesting like allergies, cough, fever, fatigue, loss of taste or smell etc.) do not come to school without first visiting with your physician, or getting a Covid-19 test, and the results indicating that you are negative.

[Editor's Note: This is the second of several articles on the Grant County Commission work session and regular meeting on Nov. 18 and Nov. 20, 2021. The SE Group gave an update on the Outdoor Recreation and Trail Master Plan.]

The first presentation of the Grant County Commission work session on Nov. 16, 2021, which covered the redistricting of the commission maps can be read at https://www.grantcountybeat.com/news/news-articles/68669-grant-county-commission-hears-first-of-five-presentations-at-work-session-111621-part-1

The second presentation came from SE Group, which has continued to work with the county and several community focus groups on the Outdoor Recreation and Trail Master Plan.

Project Manager Drew Pollak-Bruce said two of his colleagues accompanied him that day. "We have been working with our consultant team advisory committee. It's really been great to work also with Priscilla Shoup (Grant County Planning and Community Development director). She has been collecting trail information with trackers. We are looking to enhance the benefits of outdoor recreation for health and wellness, as well as for economic development. We've done a lot of focus groups and will come back next year with the results." He said the survey would be open for a couple more weeks at https://survey.alchemer.com/s3/6364776/Grant-County-Outdoor-Recreation-Trails-Survey

Annaka Egan said they would be going to the Gila Cliff Dwellings that afternoon, staying overnight at Bear Creek Cabins in Pinos Altos and visiting City of Rocks on Wednesday, before the open house at 5:30-7:30 p.m. See photos taken at the open house at https://www.grantcountybeat.com/news/news-articles/68657-se-group-and-grant-county-hold-open-house-for-outdoor-recreation-plan-111721

Julia Randall talked a bit about the visioning survey. "We would like to see more participation from those who speak Spanish. Predominantly Grant County residents are participating in the survey. People here are using public lands a lot. About a quarter of the survey participants are using them five or more times a week."

[Editor's Note: This is the first of several articles on the Grant County Commission work session and regular meeting on Nov. 18 and Nov. 20, 2021. It covers the Grant County redistricting proposals.]

With no one providing public input at the Grant County Commission work session on Tuesday, Nov. 18, 2021, and after a change in the agenda to place the redistricting report at the top of the agenda, commissioners heard from Brad Morrison of Research and Polling, Inc.

He noted the timeline for the 2020 census had been affected by Covid-19. "The data were supposed to be released in April 2021, but it happened in August of 2021. We want to get the redistricting done by the end of 2021."

Grant County saw a decline in population, with the 2020 numbers sitting at 28,185, down from 29,514 in 2010. Any county with more than 13,000 population must create more than one district. Redistricting is common after each decennial census, so that the most current population data are available. 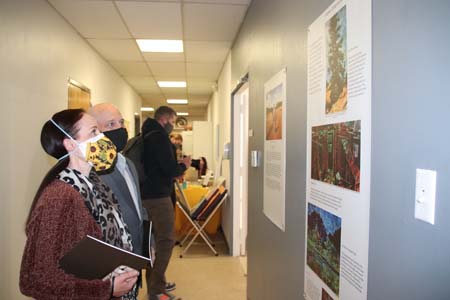 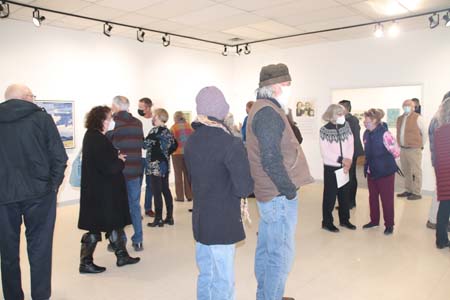 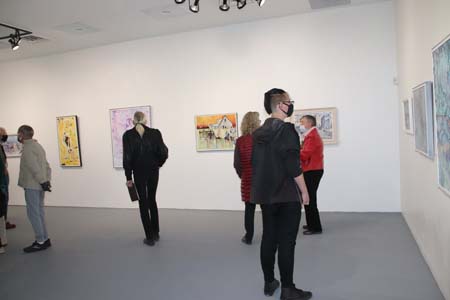 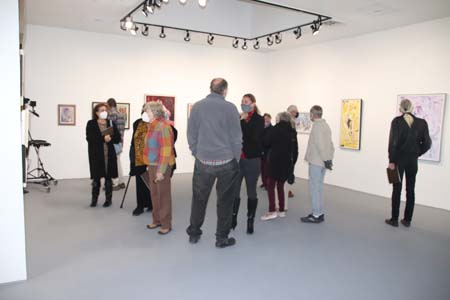 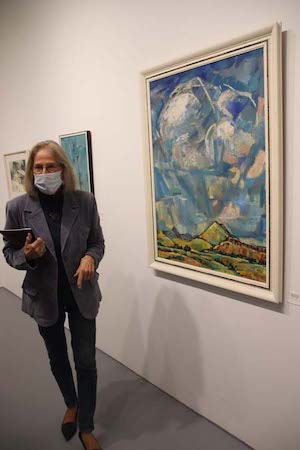 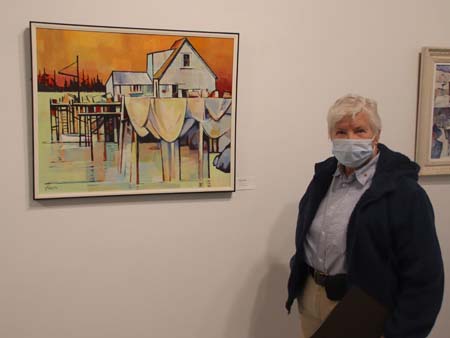 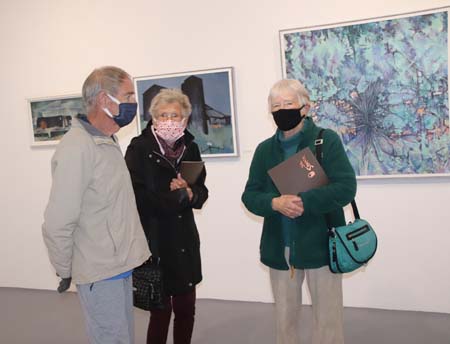 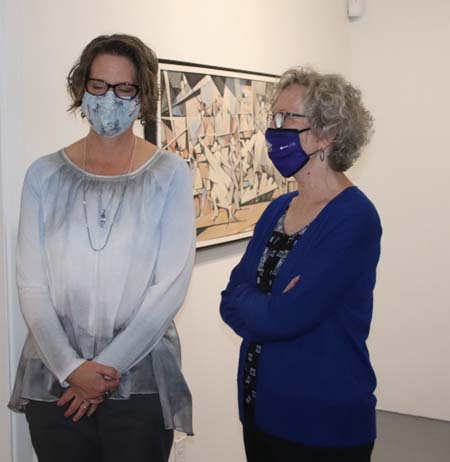 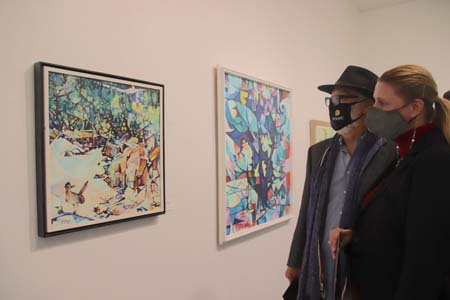 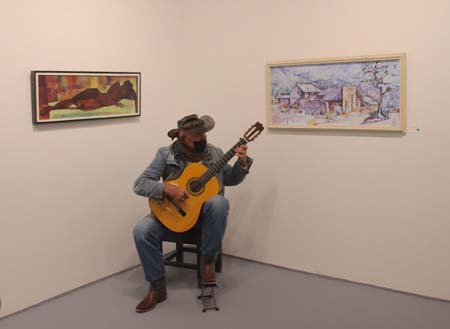 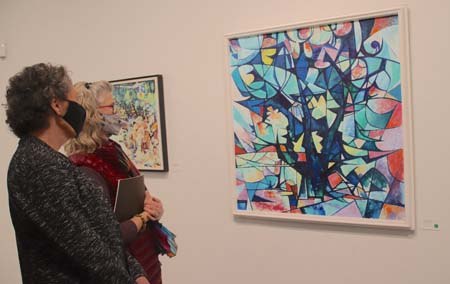 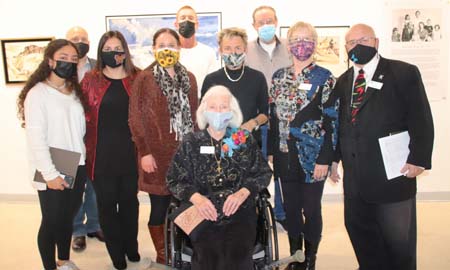 The theme of the Retrospective of the late artist John Stermer is "Lines of Force," which describes the painterly technique employed by Stermer. It marks his style and established him as a figurative abstractionist of the modern art era. He painted in Grant County between 1959 and 1991. 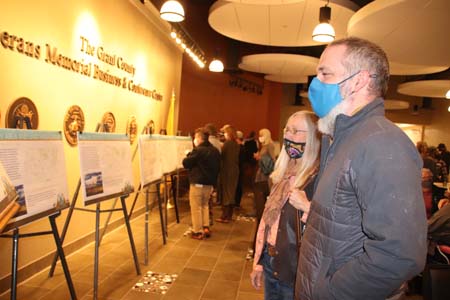 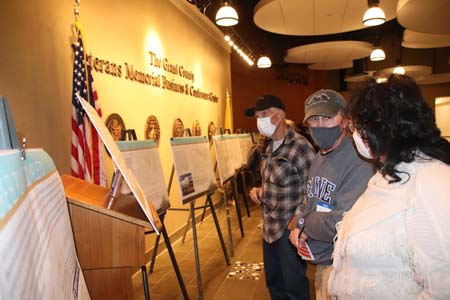 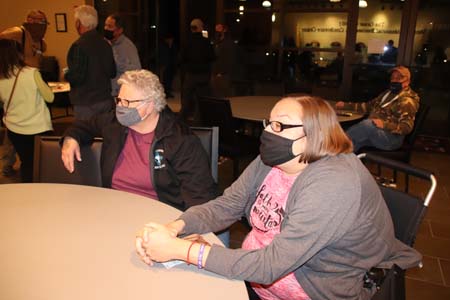 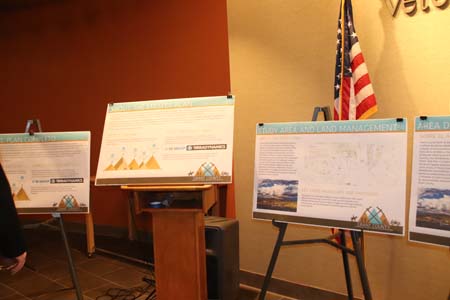 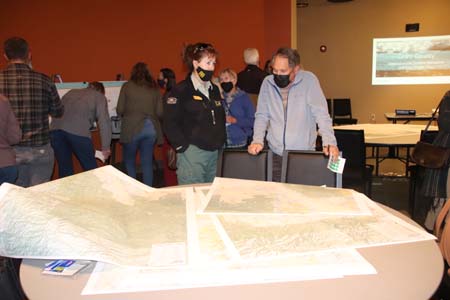 Grant County residents showed up to give input, using the dot sticker system, on the Outdoor Recreation Master Plan, underway in the county, with SE Group heading up the effort. Members of SE Group who had presented the day before at the County Commission meetings and had met with focus group members, set up a poster presentation at the Grant County Veterans Memorial Business and Conference Center to promote the plan and get feedback.

We are all currently experiencing another COVID-19 surge. This pandemic continues to put an unsustainable strain on your healthcare system. As your Community Healthcare Providers, we ask ALL Community Members to PLEASE adhere to our medical guidance! Your cooperation WILL make a huge difference. We thank you in advance for your help.

1. GET VACCINATED All available vaccines are safe and effective
• Approximately 85% of hospitalized patients are unvaccinated
• The majority of patients that do not survive are unvaccinated
• Children 5 and older can now be vaccinated
2. WEAR MASKS
3. AVOID LARGE GATHERINGS INDOORS

TESTING LOCATIONS
• HMS-- All HMS Medical Clinic locations between 8am-4pm in Grant and Hidalgo Counties
• WNMU—Watts Hall—Tuesday-Saturday, 9am-4pm
• Silver Health Care—COVID-19 Screening M-Sat 2-4pm, Sunday 4-5pm, call 575 538-2981 to schedule an appointment at the Urgent Care Clinic 1600 E 32nd Street. (please do not walk into the clinic if you are positive for COVID-19)
• GRMC—only testing as part of an Emergency Department visit