The Town of Hurley met for a regular session meeting on September 8, 2020, via Zoom at 5:01 p.m. Present for the meeting were Mayor Ed Stevens, Mayor Pro-Tem Richard Maynes, Councilor Mateo Madrid, and Councilor Freddie Rodriguez. The following is a brief overview of the meeting.

The meeting began with the approval of the agenda for the meeting and then the consent agenda.

The Department of Health on Saturday reported five additional deaths in New Mexico related to COVID-19:

[Editor's Note: Most of this article will be almost word for word and other parts paraphrased, while remaining as accurate as possible.]

The two candidates vying for the New Mexico Senate District 28 seat have never served as legislators, so whoever wins will be a freshman lawmaker at the next session. Most questions came from the audience with a few from the Daily Press presented by Reporter Geoffrey Plant. Daily Press Publisher Nickolas Seibel served as moderator.

The Department of Health on Saturday reported one additional death in New Mexico related to COVID-19:

Presenting the weekly update were Grisham and Dr. David Scrace, via Zoom, from their respective residences. Grisham was on her last day of quarantine after a positive case occurred at the governor's residence. She has since tested negative twice, but continued her quarantine for the full 14 days.

After the recent virus activity in the state, Grisham said she will continue to self-isolate.

Before getting into the data, Grisham thanked the internet audience for putting up with the virtual meeting vehicle, Zoom. She said we've all become familiar with several different virtual meeting programs over the past few months.

As of October 15, 2020, New Mexico had 672 cases and a positivity rate of 8.1%. "We are the highest in the nation, in a bad way," Grisham said. "Now we're in those columns where we are leading the country in uncontrollable spread."

Hospitalizations went up, and Grisham commented on the two-part concern of the increase. "People need health care for all kinds of reasons," she said. "We're seeing an increase in cases requiring ventilators and COVID-related care." The governor warns New Mexicans that a high capacity of COVID-related cases in the hospitals makes it difficult to receive care for the normal, daily activities that also need medical care. "It pushes out those who need help, like mothers giving birth," she said.

"We have an obligation to do more than offer condolences for those who have passed," Grisham said. On top off all the COIVD-19 cases, the first flu case of the 2020-2021 flu season was reported on October 15. "Flu is another reason people will need hospitalization."

Grisham reminds New Mexicans to visit togethernm.org/flu to find out where to get a flu shot.

"This is not new, but it bears repeating because we are not succeeding," Grisham said. "We are in uncharted waters. This is the most serious emergency that New Mexico has ever faced. The health risks are extreme." Grisham said the state is moving very rapidly in the wrong direction, and that will put undue strain on health care providers across the state. "We are beyond the markers for uncontrollable spread. The virus is now everywhere."

Grisham said it's at the grocery stores and gas stations, and plead for New Mexicans to help get the virus under control again. This includes mask-wearing and hand washing. "We need to be courteous and conscientious about how we move through the community," she said. "We have succumb to the national rhetoric; we cannot fall into that false information. This is a deadly virus and it is living among us." 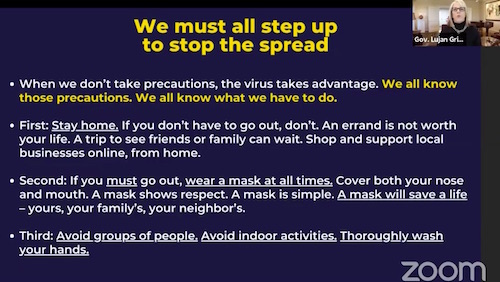 "Stay home. It keeps other New Mexicans safe. I need everyone to recommit to their own personal responsibilities and social contracts," Grisham said. "If you don't have to go out, don't go out." She said she still wants people to support their communities and small businesses. "Do it online, shop from home," she said. "We need to and must do that."

"If you go out, wear a mask," Grisham said. "I am hearing that mask wearing is getting more and more relaxed in the state. I'm with every other person that says it feels constrictive," she said. "But if it mitigates the spread, that is incredible."

Grisham said the state needs to get as close to 100% compliance when it comes to wearing masks. She also suggested not having all family members running errands in groups. 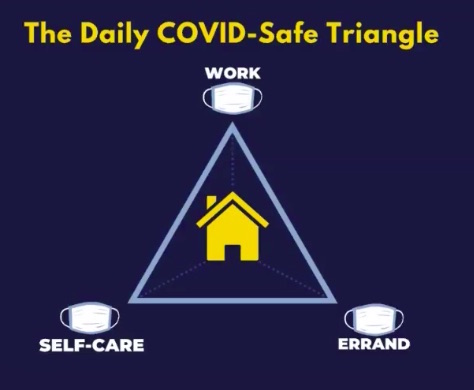 She revisited the "COVID triangle" concept she suggested last week. Essentially the request is to make no more than three stops in a day. "If you can do less, do less," she said.

The rapid response team is showing a dramatic increase. "Many places have to close down for two weeks due to positive cases," Grisham said. "We (the Rapid Response team) cannot deal with exponential spread. Businesses will have to stay closed longer before the state can come in."

"We're putting essential workers out of commission by having this type of spread," Grisham said.

Grisham warns New Mexicans that the lack of public health efforts may force the state to make tough decisions. "It is out of control and if we don't get it right we will restrict high risk activities."

"None of this is fair. This is a crisis level, horrific situation," Grisham said. "And it just means we have to do more and work harder."

Scrase agreed that fast action must be taken. "I hope we slam on the brakes," he said. "It's going to take two weeks to get the car to stop."

This week, Scrase said there was an increase in all age groups across the board. "You can pick any line and they all have increased - higher than we have been. Ever."

"I'm often accused of trying to scare people," Scrase said. "But I'm not wanting people to be afraid, I'm wanting people to get motivated." He said there's a lot more about the virus that we don't know, compared to what we do know.

Scrase also reminds New Mexicans to get their flu shots.

"It will be a significant challenge to keep up with the contact tracing," Scrase said. He also mentioned hospitals are reaching capacity. Contrary to some beliefs, border towns are not able to use neighboring states for health care. Those hospitals are at or near capacity as well.

"We all have to really recommit to fighting this virus for another year," Scrase said. "Nobody likes the situation we are in."

"The notion we are all invincible is wrong," Grisham said. "We identify the right measures, model what the trends will be, and as soon as the shift happens people stop practicing those health measures."

Grisham said she knows everyone is tired. "We are exhausted by the pandemic," she said. "If we stay at home we can manage the virus. We introduced risk and things fell apart. We are physically and emotionally fatigued." Another concern she has is that fewer folks are taking a fact-based initiative.

"This virus overwhelms every other aspect of our lives, including access to health care," Grisham said.

For further information and resources, please refer to the following:

Man shoots self in hand

On Saturday, Oct. 10, 2020, at about 3:49 p.m., Grant County Sheriff’s deputies were dispatched to Gila Regional Medical Center in reference to a patient in the ER with a gunshot wound. They made contact with Ramon Hurtado, 31, of North Hurley, who advised he had accidently shot himself in his left hand.

On Wednesday, Oct 14, 2020, at about 2:42 p.m., Silver City police officers were dispatched to a disturbance in the area of the Gospel Mission, 111 S. Texas Street. According to a police report, an officer en route to the scene made contact with a male matching the description given of the suspect. The officer detained the male and took a handgun (later determined to be a black Crossman BB gun) from his waistband. The report stated the officer also detected a strong odor of alcohol on the male's breath.

According to the report, when asked his name, the male first stated it was Nick Aguilar, then stated it was Nick Medina, and stated he was 45-years-old. The report said the officer noticed what appeared to be blood on his left thumb, hands, and lips, and Medina was placed in the officer's patrol car to wait for EMS.

The Department of Health on Thursday reported one additional death in New Mexico related to COVID-19:

A Message from Rebecca Dow

Paid for by the Committee to Elect Rebecca Dow